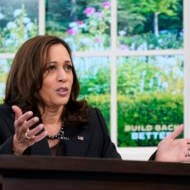 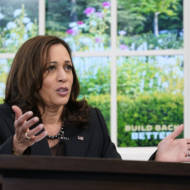 Is American Vice-President Kamala Harris doing damage control by stating for the record that singling out Israel is antisemitism?

Six weeks ago, at an event at George Mason University, Vice-President Kamala Harris praised a student, who claimed that Israel commits “ethnic genocide” against the Palestinians, for voicing “her truth.”

Harris was widely condemned for not correcting the student, who was in fact stating vicious lies about the Jewish state.

Addressing the opening session of the Anti-Defamation League’s “Never is Now’ conference on Sunday, Harris said:

“And I want to be clear about this. When Jews are targeted because of their beliefs or their identity, when Israel is singled out because of anti-Jewish hatred, that is anti-Semitism. And that is unacceptable.”