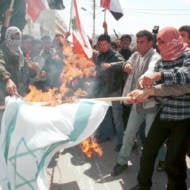 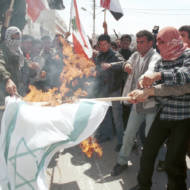 The Palestinian Authority has made it very clear that the only acceptable solution to the conflict is to wipe Israel off of the map.

Although the world pushes the magical-sounding two-state solution, the Palestinian Authority has repeatedly made it clear that the only acceptable remedy to the conflict in their eyes is to wipe Israel off the map.

On a PA TV program, the narrator slams the UN Partition plan of 1947 as “thwarting the Palestinian people’s right to self-determination.”

In November 1947, the UN approved the partition of the Land of Israel, known then as Mandatory Palestine under British rule, into two states – one Jewish and one Arab. The Jews immediately accepted, but the Arabs rejected the decision.

Incidentally, there was never any discussion of ‘Palestinian self-determination’ until 1964, when arch-terrorist Yasser Arafat established the Palestine Liberation Organization. Jews living in the Land of Israel prior to the establishment of the modern Jewish state were known as Palestinian Jews.