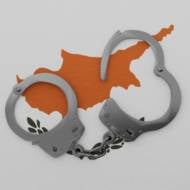 Bennett accused Iran of being behind plan to assassinate Israeli businessmen.

Police in Cyprus arrested two more Pakistani nationals on Friday linked to a plot to assassinate Israeli businessmen, according to Cypriot reports cited by Hebrew media.

Reports said a search of both suspects’ phones turned up surveillance photos of potential targets and locations. The two were said to have worked with a 38-year-old Azerbaijani hit man, the prime suspect, who was arrested in September. Cypriot counter-terror police found a pistol, a silencer and a Russian passport in his possession.

Police became suspicious of the Azerbaijani man after he was frequently seen on security video appearing to stake out a business complex in Larnaca where a number of Israelis are known to work.

A Pakistani accomplice was subsequently arrested in October.

In September, Prime Minister Naftali Bennett said Iran was behind a plot to kill Israeli businessmen on the island. Hebrew reports indicated the scheme was Tehran’s revenge for the 2020 assassination of Mohsen Fakhrizadeh, Iran’s top nuclear scientist.

One Israeli businessman reportedly targeted by the plotters is Teddy Sagi. A 49-year-old billionaire with Israeli and Cypriot citizenship, Sagi founded the gambling software company, Playtech. His other financial interests include high-tech and real estate.

Initial reports said the tycoon left Cyprus early in September after being tipped off by Israeli authorities, but Sagi said he left on his own without receiving any warnings. Other Hebrew reports suggested he was caught up in a criminal dispute.

It’s not clear if Cypriot investigators believe Iran is involved. The Iranian embassy in Nicosia denies any connection to the arrests.