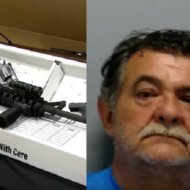 Pelle claimed he was upset about lack of social distancing and masks.

“If I gotta go out there with a friggin’ machine gun and shoot all these people, I will,” Pelle allegedly said during a call to the police department, which later seized 14 weapons from the man’s home, including assault rifles, shotguns and handguns.