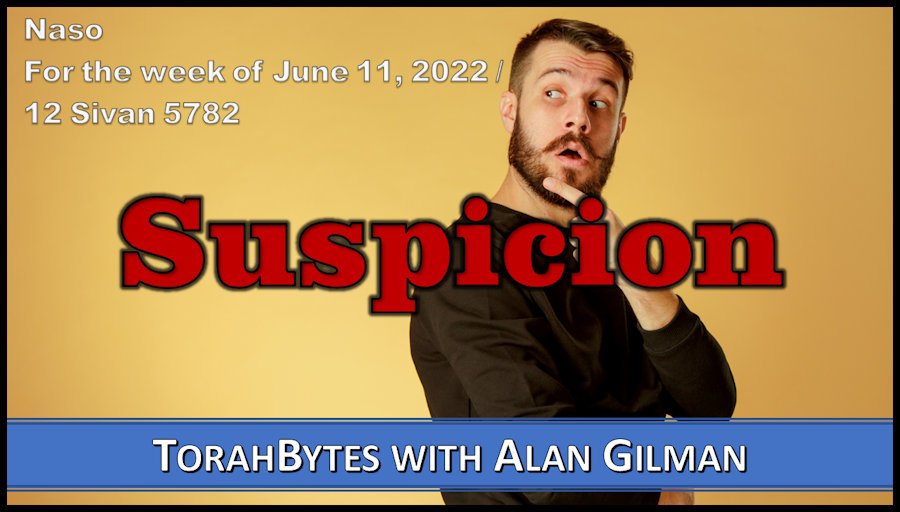 But if the woman has not defiled herself and is clean, then she shall be free and shall conceive children. (B’midbar/Numbers 5:28)

This verse is taken from an unusual passage that prescribes a test for marital unfaithfulness found in B’midbar/Numbers 5:11-31. If a husband suspected his wife of unfaithfulness, she was to be brought before the cohen (English: priest). The cohen would then perform a ritual in which the woman drinks a concoction made from holy water, floor dust, and ink. If she developed an adverse reaction to the concoction in her internal organs, then her husband’s suspicions would be confirmed, and she would be guilty. Otherwise, her husband’s suspicions would be declared unfounded; case closed.

At first glance you may think that this is of the likes of magic potions and incantations. You may also be disturbed by how a woman apparently could be held in such suspicion, dragged before a religious court, and forced to drink something so disgusting.

But that’s not what is going on here. The Torah shows us what God thinks of suspicion. I wonder how many women (and men for that matter) have been ostracized and worse because their spouse or someone else was suspicious of them. How many wrongs have been done to people based on someone’s feelings rather than based upon facts?

The Torah says elsewhere: “One witness is not enough to convict a man accused of any crime or offense he may have committed. A matter must be established by the testimony of two or three witnesses” (D’varim/Deuteronomy 19:15). Suspicion therefore is never enough to convict someone. But if that is the case, then why the need of this ritual at all? If a husband has no proof, then we might think the issue should not even be allowed to be raised.

But preventing his accusation would not likely have alleviated the situation. The prescribed ritual forces the husband to deal with his suspicion. While he may or may not do his best to lay aside his feelings, the ritual brings the matter into the open where it can be dealt with. As the couple, with the cohen’s help, deals with the situation, it will be resolved one way or another. Both the husband and the wife will be confronted with the truth.

How many times do we harbor suspicion, not just toward our spouses, but others with whom we have close relationships? Suspicion eats away at our hearts. Unless we deal with it, we will find ourselves more and more distant from the very people we need to be closest to.

Wouldn’t it be wonderful if we had a way to bring these things out into the open? If our suspicions are justified, then we can deal with the wrongs, if not, then we can forget about them and get on with our lives.

An essential dynamic at play here is that God is directly involved. There was nothing about the concoction itself that would have caused the predicted results. Somehow God himself would cause the reaction to occur if the woman was truly guilty.

So, we too can come before God and ask him to deal with our suspicions. But we need to be willing to confront them honestly and openly. Note how a third party was made to be part of the process. This allowed the issue to move outside of the immediate relationship where it could have festered due to keeping it hidden. At the same time, the issue was not to take into the public realm, where reputations could easily be damaged.

So let us deal with our suspicions and bring them into the open, where God can address them. Then when he does, we can either rectify the wrongs or forget about them for good.