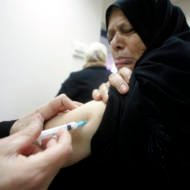 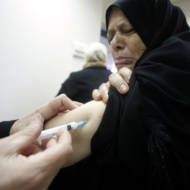 The Palestinian Authority secretly sought and received dozens of doses of a COVID-19 vaccine from Israel, according to a report from the Kan public broadcast network Wednesday.

The two governments agreed to the transfer at the beginning of this week, the report said, at the PA’s request for doses of the vaccine that could be administered in “special humanitarian cases.” The vaccinations had not yet been used, an unnamed source told the network.

Several PA officials denied the news of a secret transfer, and the government has not publicly asked Israel to help procure the transfer. Previously, it has said that the West Bank and Gaza will receive vaccines from the World Health Organization’s Covax program, beginning next month.

In a tweet Thursday, Jerusalem Post reporter Khaled Abu Toameh cited an unnamed PA source claiming that it had rejected an Israeli offer of vaccine doses.

“Palestinian Authority: We refused to accept 20 doses of vaccine from Israel. The offer was made by unofficial Israeli parties. We are working to obtain vaccines from WHO and companies around the world,” Abu Toameh tweeted.