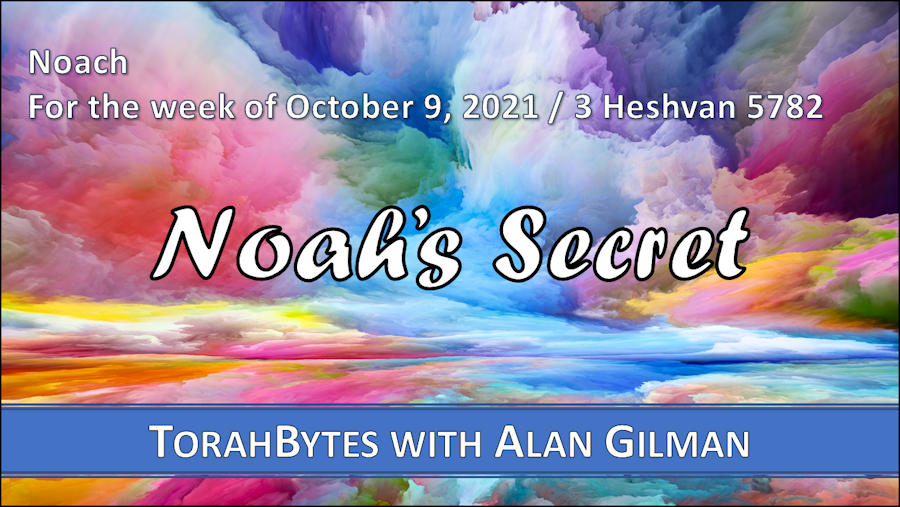 And God said to Noah, “I have determined to make an end of all flesh, for the earth is filled with violence through them. Behold, I will destroy them with the earth. Make yourself an ark of gopher wood. Make rooms in the ark, and cover it inside and out with pitch. (Bereshit/Genesis 6:13-14)

We live in troubled times. Whether you believe that we are doomed due to climate change or climate change politics, it’s pretty unsettling. COVID, of course, has taken this to another level. Whether we view it as the plague of all plagues or an excuse for the establishment of totalitarian control, pandemic or no pandemic, we are certainly in a global predicament.

Whatever the exact nature of the current situation, whether we are on the brink of disaster or this whole thing will blow over (I would be very happily surprised if that is the case), this week’s parsha (weekly Torah reading) is instructive. Its lessons are a sort of one-size-fits-all solution to just about any kind of challenge we might face in life. While it’s simple in its all-encompassing nature, implementing it is easier said than done. Yet, it’s something that is within reach of everyone.

This week’s reading includes the story of Noah and how God enabled him to overcome the second greatest disaster in world history. The greatest disaster of all time hasn’t happened yet. As we wait for that to happen, we continue to endure many lessor disasters. So let’s learn Noah’s secret.

It’s not a secret, actually. We are told in Bereshit/Genesis, chapter six and verse nine, “Noah walked with God.” That’s it. That’s all we need to know, sort of. You need the rest of the Bible to fully understand what walking with God is all about. But that’s what he did. That’s what made the difference between him and everyone else. That’s why only his family survived the flood. And that’s what we need to survive the challenges of our day.

To walk with God is a metaphor, a figure of speech, that creates a mental picture of traveling with God as we would with any other person. Walking with someone is necessarily relational. It requires a basic agreement between the two parties. If the parties are peers, the directional orientation may be that of mutual consent. If one is regarded as the senior in any way, then that person sets the course and the other follows, which would be the case with Noah and God. God set the course; Noah followed.

Noah’s day was one in which the prevailing culture was on the brink of destruction due to lifestyles completely contrary to the Creator’s design. Noah was different in that he kept in step with God. As a result, God entrusted him with a long-term plan that saved not only his own family, but also God’s overall creation project. To walk with God is not only beneficial for self, it finds fruition in being a blessing to others.

This is also the essence of God’s call of Abraham (see Bereshit/Genesis 12:1-3). The directive to him to go to the land which would become the land of Israel was a call to walk with God. It’s no wonder, that when the Messiah finally appears on the scene, he says, “Follow me.” To walk with God is set to one’s course in the direction in which God is going. Whatever might be happening around us, God sets the course; God determines the destination.

How walking with God finds expression in each person’s life will be different. For Noah, it meant spending a large portion of his life building an enormous rescue craft that must have appeared ridiculous to everyone else. But since Noah walked with God, he wasn’t deterred by people’s opinions and emotions. Abraham lived as an elderly foreigner in a hostile environment with little to show for his efforts while he was alive yet laid the groundwork for God’s master plan. We could look at almost every other key Bible character and remark on how they marched to the beat of a different drum – different metaphor, but you get the point.

So then, when you and I respond positively to the Messiah’s call to follow him, we find ourselves on the same journey as all these before us who walked with God. To others, we may look strange, out of place – crazy perhaps – but on a road full of life and blessing. We don’t have to be overwhelmed by these troubled times if we walk with God.