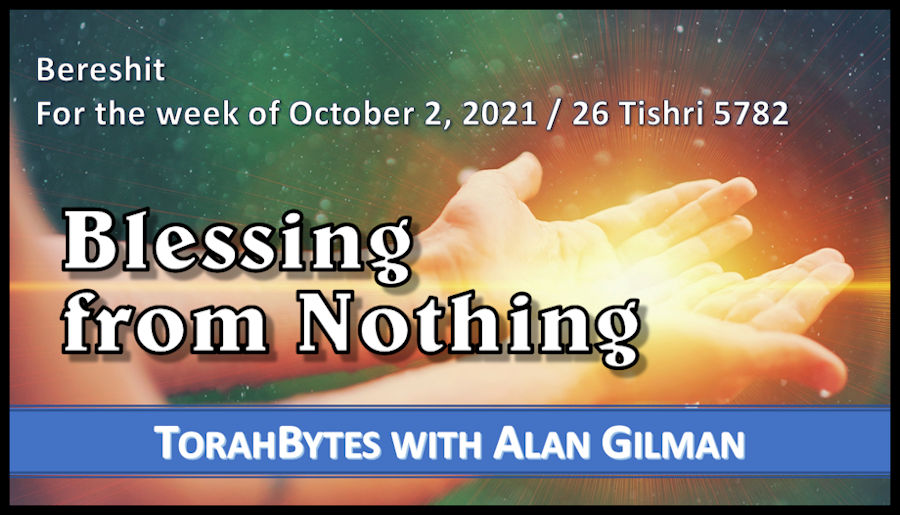 And God blessed them. And God said to them, “Be fruitful and multiply and fill the earth and subdue it, and have dominion over the fish of the sea and over the birds of the heavens and over every living thing that moves on the earth.” (Bereshit/Genesis 1:28)

Some time ago I read through the New English Translation, also called the NET Bible. One of its key features is its extensive notes. One of those notes led me to consider an intriguing concept. It’s one of those things that is difficult to prove, but at some level, is self-evident. It’s from Bereshit/Genesis 1:22, where the word “blessed” is first found in the Bible. It’s in reference to the sea creatures and birds. The second time is in the verse I quoted at the start when God blessed human beings.

The NET Bible note makes a connection between the Hebrew words for create and bless based on the similarity of their sounds. The Hebrew for create is bara; the Hebrew for bless is barach (if you have never listened to the TorahBytes audio version, now might be a good time). As far as I know this similarity is purely coincidental. I doubt the early readers of the creation story would have thought to make a connection between creating and blessing, but there is one.

Torah is clear that God is the author of life. He is the originator, designer, and developer of all there is in the universe. He brought everything into existence by the exertion of his will through the power of his word. He himself is not created but eternal. The universe is not made up of his substance as if he used up part of himself and transformed it into something. Rather, he created everything out of nothing.

The NET Bible’s suggestion of a close association between bara and barach caused me to be aware of a creative dynamic that is present in blessing. When God blesses something or someone, he fills it with life. It possesses health, strength, and all it needs to grow and to reproduce. It is the opposite of cursing, whereby life is removed, and death ensues.

The connection between create and bless should be obvious. One initiates life, the other enables it to come to fruition, realizing its potential. That God is both the one who creates and blesses underscores that he is more than the originator of life, but it’s ongoing sustainer. Creation is dependent upon him both for its origins and its continuation. But this is not the intriguing idea that came to me that day.

Why is this important? Maybe it’s just me, but when I am in a difficult situation and I look to God to help me, I tend to base my expectations upon possible solutions that appear to exist. I think in terms of what’s possible. Sure, I give God some credit for being God, but I tend to think he is really good at fixing things that exist, but not necessarily providing solutions that require him to make something out of nothing. He did that at creation; he doesn’t do that now—or does he?

God’s blessing is not derived from his ability to manipulate that which already is. His blessing is based on himself, his infinite creative self. His resources, therefore, are unlimited. There’s nothing he can’t do. I can’t say I know how this works. But instead of my focusing on possibilities, I need to expect the impossible. Blessing is dependent upon God and not on the world around me.

Recognizing this connection between bara and barach is essential to effectively face today’s challenges. Ever changing rules and regulations are restricting our lives. Everything seems more difficult than it was a year and a half ago. Many people are confused, depressed, and angry. Many are waiting for it all to be over. But that’s not necessary when we know the One who blesses out of nothing. Once we accept that his possibilities are limitless, we can be open to anything he wants to do in and through us.