Good News Israel! 18 Things to Celebrate About Jerusalem, Israeli Techies Help Others to Succeed, and More! 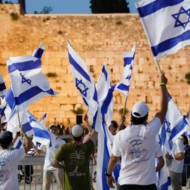 Montage shows 18 great things about Jerusalem, members of the startup community perform acts of kindness to help each other, famous rabbi describes miraculous events leading to the founding of the State of Israel, and much more!

This article describes many of the acts of kindness that Israelis perform to help other members of the Startup community. They include rent-free offices, networking, brainstorming, training, sharing data and referrals to investors. Although competition is fierce, Israeli entrepreneurs want others to succeed too.
https://www.calcalistech.com/ctech/articles/0,7340,L-3866590,00.html

Rabbi Soloveitchik and the State of Israel

Fascinating archival 1955 recording of Rabbi Joseph B. Soloveitchik describing the miraculous events leading to the founding of the modern Jewish State. He stated that “were one to document (the history of) the United Nations, they accomplished nothing else.”

70-year-old has 3 ceremonies in a month

A 70-year-old former immigrant from Moldova, remarried his wife at a ceremony in their hometown of Nof Hagalil. It was his 3rd ceremony in a month following conversion to Judaism and Bar Mitzvah. They had a civil marriage 47 years ago, but now decided to have a Jewish wedding.
https://www.israelnationalnews.com/News/News.aspx/287884

The first US passport to show Jerusalem is in Israel

US Ambassador to Israel David Friedman presented the first-ever US passport to list Jerusalem as part of Israel. He gave the new travel document to an 18-year-old US citizen, who had fought twice in the US Supreme Court to have his place of birth shown as Jerusalem, Israel.
https://www.israelnationalnews.com/News/News.aspx/290175

On the week of Yom Ha’Aliyah, Israel welcomed its 16,000th immigrant of 2020. The second article describes some of the Anglo-Israelis who were key to the founding of the State. They include Chaim Weizmann, David (Mickey) Marcus, Gold Meir, Abba Eban and Henrietta Szold.
https://www.israelnationalnews.com/News/News.aspx/290059
https://www.israelnationalnews.com/News/News.aspx/289887

CLICK HERE FOR THIS WEEK’S GOOD NEWS FROM ISRAEL!

The post Good News Israel! 18 Things to Celebrate About Jerusalem, Israeli Techies Help Others to Succeed, and More! first appeared on United with Israel.