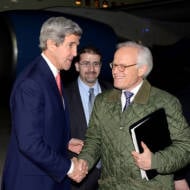 American Jewish leaders were alarmed by the negative stereotypical comments about Jews and Israelis made by one of the most vocal opponents of Trump’s nomination of attorney David Friedman as US ambassador to Israel.

Indyk served as US ambassador to Israel, and then assistant secretary of state, between 1995 and 2001, followed by a stint as President Barack Obama’s envoy for Israeli-Palestinian negotiations in 2013-2014.

Reliable Washington sources report that the maps and proposals Indyk and his aides formulated in recent years are still central to the Obama administration’s strategy for the Palestinian issue. Indyk also is said to have remained in contact with key U.S. policymakers even though he left the Obama administration and now serves as executive vice president of the Brookings Institution.

In media interviews and on Twitter in recent days, Indyk has emerged as one of the most vociferous defenders of the Obama administration’s Dec. 23 vote against Israeli settlements at the United Nations. He is also one of the most vocal opponents of President-elect Donald Trump’s nomination of attorney David Friedman as U.S. ambassador to Israel.

Indyk’s credibility is now being called into question, however, as several Jewish organizations are urging him to clarify whether or not he made a series of unusually harsh remarks about Israel and Jews in a tape-recorded private conversation when he was executive director of the Washington Institute for Near East Policy, a prominent think tank.

In that conversation, in 1989, Indyk reportedly said Israelis are “paranoid,” “arrogant,” and think that “the rules of society do not apply [to them]” because “they are the goy’s rules.” Connecting Israeli attitudes to what he characterized as Jewish attitudes in general, Indyk reportedly said that “Jews would do whatever they can to avoid paying taxes,” and that Jews believe it is justified to “find a way to ignore the law or get around it.” He added, “In my own family, my grandfather used to stay up nights to figure out how to avoid paying taxes.”

The reported remarks “echo three of the most infamous centuries-old tropes of anti-Semites,” Prof. Eunice G. Pollack, a historian of anti-Semitism and co-editor of the Encyclopedia of American Jewish History, told JNS.org.

“You have an updated version of the classic ‘Jewish swindler,’ combined with the ‘disloyal Jew’ who evades his patriotic duty to pay taxes, and the millennia-old ‘arrogant Jew’ who, in a more religious era, was accused of deriving his arrogance from his partner, Satan,” said Pollack.

Indyk has not responded to multiple inquiries from JNS.org about the statements. The quotations were first raised by the organization Amcha – the Coalition for Jewish Concerns, headed by Rabbi Avi Weiss, when Indyk was nominated as ambassador to Israel in 1995. But they were not picked up by the news media at the time and were not raised by senators at his confirmation hearing.

Farley Weiss, president of the National Council of Young Israel, told JNS.org, “I hope he didn’t say such things, and if he did, I hope he will disavow them. Either way, he needs to address the controversy.”

Sarah Stern, president of the Endowment for Middle East Truth (EMET), a pro-Israel think tank in Washington, said in a statement to JNS.org that her organization is “calling on Ambassador Indyk to immediately clarify whether or not he made these horrific statements.” Stern said it would be “very ironic” for Indyk to oppose the David Friedman nomination over past statements that Friedman made, “if Indyk made the repulsive remarks he is alleged to have made prior to his own nomination.”

In a tweet that was quoted in The New York Times and elsewhere, Indyk sarcastically asserted that Friedman would be “a great ambassador for the deep settler state. But David Friedman needs to be U.S. envoy to all Israelis. Is he up for that?” In an interview with CNN anchor Chris Cuomo, Indyk said Friedman’s call for moving the U.S. embassy from Tel Aviv to western Jerusalem is “incendiary” because it “would imply that the United States was recognizing Israeli sovereignty over all of Jerusalem, including the Arab part…which has the third-holiest mosque in Islam.”

Rabbi Abraham Cooper, associate dean of the Simon Wiesenthal Center, told JNS.org that Indyk “forgot to mention that what he calls ‘the Arab part’ of Jerusalem includes a large Jewish community, the Western Wall, the Temple Mount, and the Mount of Olives, which contains the oldest Jewish cemetery in the world. That mosque is the third-holiest site to Islam, but Har Habayit (the Temple Mount) is Judaism’s holiest site.” Cooper said “the current status quo, in which the U.S. does not recognize any part of Jerusalem as sovereign Israeli territory, is patently unfair.”

The Wiesenthal Center, World Jewish Congress, National Council of Young Israel and other Jewish groups have endorsed the Friedman nomination. J Street, Americans for Peace Now and Ameinu oppose it.

EMET’s Stern, for her part, said that Indyk’s “judgment and objectivity” were “severely undermined” two years ago, when it was revealed that he had accepted a $14.8-million contribution from the government of Qatar for the Brookings Institution. Qatar is the largest financer of the terrorist organization Hamas.

Adam Kredo, a senior foreign policy writer for the Washington Free Beacon, told JNS.org that Indyk “is known among reporters for anonymously criticizing Israel in the press, for planting stories meant to pressure the Jewish state into making concessions, [and for] leading the Obama administration’s efforts over the years to discredit Israel and blame it for the failure in peace talks.”

Indyk took to Twitter this week to accuse Kredo of spreading “fake news” when Kredo reported that Vice President Joe Biden was involved in lobbying on behalf of the U.N. resolution against settlements. Israeli government officials subsequently publicly charged that Biden personally lobbied the government of Ukraine to back the resolution. Biden has denied the accusation.

At the same time, Indyk has been engaged in a Twitter mini-war this week with both an Israeli embassy official and a former colleague. It began with Indyk tweeting that the U.N. resolution was not an attack on Israel but was aimed only at “settlers, who undermine peace negotiations [and] are hurting Israel.” Reuven Azar, deputy chief of mission at the Embassy of Israel in Washington, replied, “Please don’t lie to your followers. This pro-BDS resolution is unprecedented.”

Indyk shot back, “Diplomats are sent abroad to lie for their country. But that doesn’t include accusing people of lying. Leave that to your political bosses.” Azar responded, “We’ll keep fighting for our country and you’ll keep lecturing us,” to which Indyk sarcastically replied, “Happy Chanukah to you too.”

Robert Satloff, who serves in Indyk’s former post as executive director of the Washington Institute for Near East Policy, weighed in on Azar’s side, tweeting, “I disagree w/my friend @martin_indyk. We’ve tried and failed using chainsaw on settlement issue; it needs a scalpel.”