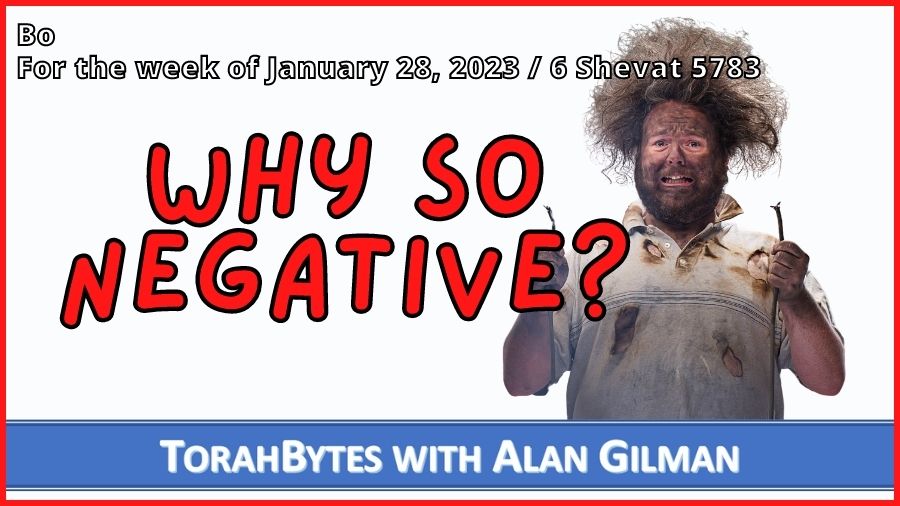 Then the LORD said to Moses, “Go in to Pharaoh, for I have hardened his heart and the heart of his servants, that I may show these signs of mine among them, and that you may tell in the hearing of your son and of your grandson how I have dealt harshly with the Egyptians and what signs I have done among them, that you may know that I am the LORD.” (Shemot/Exodus 10:1-2)

I have been told on more than one occasion that I am too negative. You may think the glass is half-full, while I may not even see a glass! That’s an exaggeration, I hope. But I would be careful about drinking that water, since it might be poison. One of my roles at a high-tech firm some years ago was quality control. I don’t know if that was a good idea for someone like me. Not that I wasn’t good at it. I may have been too good as I would find all sorts of problems that the designers never dreamed of. I was a natural. Is it my fault that when I walk into a room, I immediately notice the one picture frame that’s a bit off? Not to mention wondering what that squeaky noise is. And do I smell something burning?

This doesn’t mean I don’t appreciate the positive. I love it when things work well. Perhaps it’s possible that the reason why I am so sensitive to the negative is because I love the good so much. Where I need to be most careful is in relating to people in the process. I need to choose when, how, and with whom to mention negatives. Sometimes negatives should be overlooked for the sake of relationships and various life priorities. But it may not surprise you to learn that I am concerned that overlooking the negative for some greater good is happening far too often in our day, as we are, in my opinion, not taking the negatives seriously enough.

God called Moses to confront a great negative. Pharaoh, king of Egypt, enslaved the people of Israel in order to prevent them from ever joining forces with an enemy army. God sent Moses and his brother Aaron to demand Israel’s release. Pharaoh’s refusal to heed God’s word resulted in another negative – a set of negatives – the ten plagues. The Hebrew words for plague, are better translated as “strike.” God pummeled Egypt over and over again until Pharaoh gave way. Even then, after Israel headed out, he attempted to bring them back, resulting in his army drowning in the sea. So much negative.

A previous job I had was that of a business college instructor. As I was starting out, I was informed by one of the veteran instructors that she preferred to correct students’ papers in green ink, since the traditional red was deemed to be too negative. At the time, as the new guy, I went along with it. But looking back, we weren’t highlighting the correct answers but pointing out the errors. We did that to show the students where they needed to improve in order to give them the best chance of succeeding in the workplace. I, like anyone else, don’t find pleasure in having my mistakes highlighted, but there’s a time to unambiguously point out mistakes.

Pharaoh was making a huge mistake. People were unjustly suffering due to his selfish motives. He could have simply acquiesced to God’s demand and saved himself and his people from needless suffering, but he didn’t. According to the design of the world which God made, Pharaoh’s arrogance was destined to lead to terrible consequences unless he changed course. Welcome to Planet Earth, Pharaoh.

Welcome to Planet Earth, everyone! How much longer can society pursue its current course before God’s judgment is poured out? Pharaoh and company went years and years thinking they could get away with treating their fellow human beings as a commodity. But it was only a matter of time before God would say, “Enough is enough.” The same is true for our day. We mistake God’s patience for either his non-existence or his disinterest. Worse, many in the name of faith in Messiah, put a positive spin on his intentions, ascribing to God love for humans not that different from that of a child for his puppy. God indeed yearns for us to know his goodness for all eternity. He longs to rescue us from our misguided and selfish behavior. Yet, he will only wait so long before millions will finally and permanently suffer the consequences.

Am I being too negative? Then I guess a physician diagnosing cancer is also too negative. It is not positive spin on my part (I wouldn’t do that!) to say the cancer diagnosis is an expression of goodness despite its negativity. Heeding the negative appropriately is the pathway to an enduring positive outcome. Unless we begin to see the negatives for what they are, we will not experience the positives in the way God desires for us.