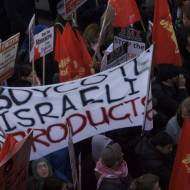 While BDS and its supporters have won some local legal battles in the US, the overall picture is that of staunch support for Israel and opposition to boycotts on the Jewish state.

Almost exactly a month before Israel’s 70th birthday, the Wisconsin State legislature passed an anti-BDS (Boycott, Divestment and Sanctions) bill aimed to prevent economic warfare against the Jewish state. Wisconsin’s decision on March 20 to pass Assembly Bill 553 made it the 25th state to enact legislation that prohibits any state agency, or other body in state or local governmental units, to contract with an entity that engages in a boycott against Israel.

In the state next door, however, St. Louis-based Stuart Klamen told JNS that Missouri lawmakers are meeting roadblocks in their efforts to pass similar legislation.

The bill, SB 849, has been withdrawn from floor debate and moved back to the informal calendar.

Missouri is the latest state to encounter challenges against its anti-BDS legislation.

In January, a judge in Kansas ruled in a lawsuit filed by the American Civil Liberties Union on behalf of an educator that the state cannot enforce its anti-BDS law because it violates the plaintiff’s First Amendment rights. The ACLU then filed a similar lawsuit against an anti-boycott law in Arizona.

Klamen, a math teacher who founded the pro-Israel Bergson Group in 2015, said Sen. Jill Schupp (D-Mo.), a sponsor of the Missouri bill, had attempted to preempt the problems experienced by Wisconsin by specifying in its legislation that the bill only applies to companies, as opposed to individuals—and for that matter, only companies with state contracts for more than $10,000.

While Klamen believes that the Missouri bill will ultimately pass—if not this year, then next—he and fellow Columbia, Mo.-based activist Daniel Swindell noted that several anti-Israel groups have been putting pressure on legislators to vote against the bill. Swindell reported that anti-Israel groups have been showing up to sessions at the capital and lobbying state representatives.

At the 2018 St. Louis Women’s March, pro-BDS activist Sandra Tamari called on Schupp to withdraw her sponsorship of SB 849.

“You have done so much for the women of Missouri,” Tamari pleaded with the legislator before an audience of about 20,000 people. “I was shocked to learn that you are . . . backing [US President Donald] Trump’s agenda to make accountability of Ahed [Tamimi]’s abusers illegal.”

She was referring to the arrest of a 17-year-old Palestinian girl filmed slapping and kicking two Israeli soldiers.

“Make sure our tax dollars . . . don’t support this abuse,” said Tamari. “Our feminism must include all women and girls, especially those . . . that are victims of US and Israeli militarism and colonialism.”

Similarly, in a guest commentary published by the Missourian, University of Missouri graduate Jalal El-Jayyousi, a member of Mid-Missourians for Justice in Palestine, came out against the senate bill as an attempt to “silence the voices of concerned Missourians protecting Israeli violations of Palestinian rights.”

She asked: “Why are Missouri legislators introducing a law that benefits a foreign government at the expense of Missourians?”

Alan Clemmons told JNS this isn’t the first time he has seen virulent pro-Palestinian groups push back against anti-BDS statutes.

Clemmons, a member of the South Carolina House of Representatives, explained that when his state passed the country’s first anti-BDS legislation, “we encountered pushback” from Students for Justice in Palestine [SJP], the Council on American-Islamic Relations [CAIR] and other groups. But he said that in the end, it turned out to be a case of a loud minority pushing back against a louder majority.

He added that “none of them have been able to overcome that American patriotism that we as Americans feel for Israel.”

Nevertheless, the flames of the fire are being fanned. Earlier this year, when a pro-Palestinian student charged that a resolution supporting Jerusalem as the capital of Israel (House Resolution 1027) being discussed in the Florida House Government Accountability Committee as a threat to peace, the bill sponsor interpreted the student’s comments as a threat.

“There will be no true peace and safety for any of your constituents if resolutions like this . . . are passed,” said Reem Zaitoon, a Florida State University student and member of the school’s chapter of Students for Justice in Palestine.

“If I heard right, the previous speaker basically threatened our constituents with terrorism if we voted for this bill,” responded State Rep. Randy Fine (R-Brevard County), one of the sponsors of the resolution with State Rep. Jared Moskowitz (D-Coral Springs).

In March, the committee voted 22-0 to support it.

At the same time, a collection of anti-Israel groups teamed up to undermine Florida House Bill 527 and Senate Bill 780 prohibiting Florida from doing business with companies that boycott Israel.

Friends of Sabeel North American, Jewish Voice for Peace, SJP and CAIR sent representatives to the appropriations committee hearing, telling committee members that the bill infringed on their right to free speech, according to the Sun Sentinel. The House committee rejected the argument because HB 527 does not outlaw boycotts of Israel, but instead establishes that taxpayer money should not be involved in such efforts.

The Palestinian coalition launched a website to stop passage of the senate version, which was sponsored by Sen. Joe Negron (R-Fla.). The website described the BDS effort as an effort to “shed light on the apartheid conditions” faced by Palestinians and featured a video that called Israel a “hyper militaristic pariah state.”

CAIR sent several notices to its members, urging them to contact their elected representatives in the Florida senate to oppose the bills. The organization also threatened to file a lawsuit against Florida if it passed the anti-BDS bill.

Sen. Dana Young (R-Fla.) says legislators were turned off by this kind of pressure.

“I, for one, am offended by any testifying individual who comes and threatens a lawsuit as a way of trying to influence our work here as a legislature,” he said in a statement.

Daniel Diker, a former secretary general of the World Jewish Congress, told JNS that Palestinian organizations exploit the freedoms of U.S. protection to promote “an Islamic totalitarian and radical view” that calls for the annihilation of the Jewish state. He added that anti-BDS legislation is legally justified.

‘They Will Not Have Much of an effect’

The federal government has long used restrictions on contractors to promote various social values, according to Eugene Kontorovich, a law professor at Northwestern University.

“Contractors have been required to abstain from a variety of otherwise legal activities,” he explained to JNS. “And state pension funds have long engaged in ‘socially conscious’ investing, avoiding investing in companies based on their environmental, employment or labor practices.”

Kontorovich said that while he believes the ACLU claims regarding the First Amendment will be more salient with legislators than any previous claims by Palestinian groups—and that they might give legislators pause—“the First Amendment claims are bogus. Given they depend on fabricated cases, ultimately, they will not have much of an effect.”

Several Jewish groups have stepped up to counter these latest claims, such as Zachor Legal Institute. The organization has researched, drafted and published several papers in law reviews regarding the First Amendment and anti-boycott laws.

At its Core: Hate

Arab states have used economic warfare against Jews for decades. As far back as 1945, they organized a boycott against Jewish settlements in British Mandate Palestine to prevent Jews from creating a state. The declaration read: “Products of Palestinian Jews are to be considered undesirable in Arab countries.”

The BDS movement, which launched in 2005, is considered an attempt to repackage the old boycotts of Israel by calling for an economic boycott based on the state’s alleged mistreatment of current Palestinians.

BDS is understood to have anti-Semitic roots. Omar Barghouti, a founding member of the Palestinian Campaign for the Academic and Cultural Boycott of Israel, has been quoted as saying: “Ending the occupation does not mean anything if it does not mean upending the Jewish state.”

Similarly, Norman Finkelstein, an American political scientist active in the BDS movement, has stated in several interviews the end goal of the BDS movement: “There is no Israel.”

Diker said BDS organizations manipulate their language to camouflage their intentions as trying to protect Palestinian rights. But when translated into “basic English,” they are “all pro-death-to-Israel orgs.”

Jacob Millner, Midwest regional director of The Israel Project, said the reason that despite all the noise made by pro-BDS organizations, legislators pass these bills is because they understand BDS is wrong—and that at its core, it is a hate movement.

“The BDS people may be poisoning the environment,” stressed Diker, “but they are losing the war.”