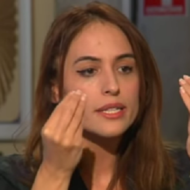 A leading human rights activist in Tunisia recently slammed her nation for discriminating against Jews, Christians, and other minorities.

Yamina Thabet, head of the Tunisian Association for Support of Minorities, took a strong stand during a panel discussion on BBC Arabic, blasting Tunisian education curricula for refusing to acknowledge Tunisian Jewry or Christianity.

She also argued that the Tunisian constitution’s definition of national identity as “Muslim” perpetuates injustice, reflecting a larger problem in the Muslim world.