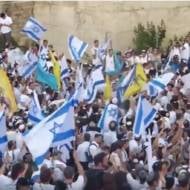 This exciting and uplifting film highlights the miraculous events of the 1967 Six Day War, emphasizing the Divine hand orchestrating these remarkable events.

The 28th day of the Hebrew month of Iyar, Jerusalem Day, is a day of celebration and the recitation of Hallel – psalms of thanksgiving and praise of the Almighty for the great miracles that he bestows upon his people.

The odds were stacked against the Jewish state on every military front, yet Israel, fighting for its very existence in June 1967, defeated the surrounding Arab countries, captured the Golan Heights and Sinai desert, and liberated Judea and Samaria and the Holy City of Jerusalem.

After 2,000 years, Jerusalem was restored to the Jewish people. Watch and learn about this modern-day miracle!