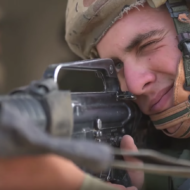 Whether in the battlefield or in an urban setting, the IDF is prepared to fight any and all terrorists coming its way.

This creates an almost impossible situation for any moral army operating to defeat the terrorists.

That’s why the IDF developed brilliant strategies for urban combat.

Watch the IDF soldiers prepare for this new type of warfare.