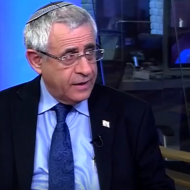 Dr. Mordechai Kedar, a lecturer at Bar Ilan University and an expert on the Middle East, discusses the potential prisoner swap with Hamas and whether Israel should accept the proposed deal.

Palestinian newspaper Al-Quds revealed the details of the Egyptian proposal for a prisoner swap, according to which Israel would hand over the bodies of 39 Palestinians who fought in the 2014 Gaza war, including 19 Hamas members, in exchange for information on the Israeli captives. In the next stage, Israel would free 58 Palestinian prisoners released during the Gilad Shalit prisoner swap of 2011, but later re-arrested for terror activities. Egyptian-led negotiations on a prisoner exchange would then take place.

Hamas has accepted the deal and is awaiting Israel’s response.

Watch this video and find out what Dr. Mordechai Kedar, an Israeli scholar of Arabic culture and a lecturer at Bar-Ilan University, has to say about the swap and whether Israel should consider it.