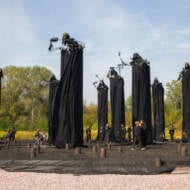 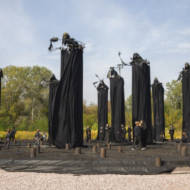 In a show of desecration for Holocaust victims, Russian bombs fell and damaged the Babyn Yar memorial in Kyiv.

On Sept. 29-30, 1941, more than 33,000 Jews from Kyiv — men, women and children — were systematically machine-gunned by the Nazis and Ukrainian collaborators and buried en masse in a ravine.

The United States Holocaust Memorial Museum considers Babyn Yar to be “one of the largest mass murders at an individual location during World War II.”

In a show of desecration of the Holocaust victims, Russian bombs damaged the memorial center on Tuesday.