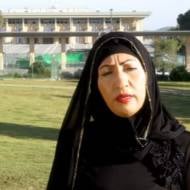 On Israel’s Independence Day, Sarah Zoabi, a Muslim Arab-Israeli, expresses her profound “love and loyalty” for the Jewish state.

“I’m here to shed some light, with all my might, on the truth about Israel,” states Sarah Zoabi, a Muslim Arab from Nazareth.

In poetic language, she expresses her profound “love and loyalty” to her “homeland,” the State of Israel.

She slams the anti-Israel leaders of Muslim countries that attack Israel, telling them they should be “ashamed” and promising to defend Israel “with every part of my being.”

“The State of Israel is here to stay,” she declares, ending with a prayer that God protect the people of Israel, its leaders and its prime minister.

Listen to this impassioned address to the Muslim world in defense of Israel and learn why Zoabi has so much love for the Jewish state!