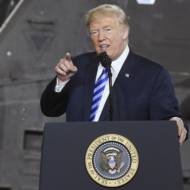 U.S. President Donald Trump is battling for funding to construct a wall along the nation’s border and cited Israel’s massive security barrier as proof that such a strategy is effective.

Speaking to reporters before he signed an anti-human trafficking measure on on Wednesday, Trump said “[Israel] put up a wall and they don’t have a problem anymore.”

The president quoted Israeli Prime Minister Benjamin Netanyahu as saying that Israel’s security barrier is “99.9 percent effective.” The Jewish state took the step to prevent Palestinian terrorists from maiming and killing innocent civilians during a wave of horrific terror attacks in 2002-2003 that the Palestinians call the “Second Intifada,” during which they launched suicide bombings and other atrocities.

Israel’s security barriers protect it in the north from Hezbollah terrorists in Lebanon, in Judea and Samaria from Palestinian terrorists, and along the southern border from Hamas, ISIS, and illegal migrants from Africa.