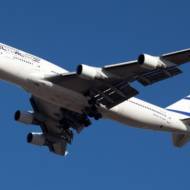 An Israeli pilot whose grandparents were murdered in the Holocaust celebrates the eternity of the Jewish People while flying over Germany.

Joined by a planeload of passengers, a pilot for El Al Israel Airlines, whose grandparents were murdered in the Holocaust, proudly flew over Germany with the Israeli flag, singing “A very narrow bridge” and “Am Yisrael Chai! (The Jewish Nation Lives!”).

This is one of millions of small victories over those who sought to destroy the Jewish People.

Watch and see the pride, passion and joy!

Am Yisrael Chai! Israeli pilot for El Al whose grandparents were murdered in the Holocaust returns to Germany with a special message, proudly flying over Germany with the Israeli flag, and singing "A very narrow bridge" with the whole plane!