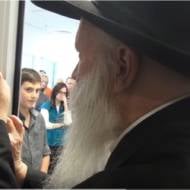 The world authority on Jewish mysticism explained the meaning behind the ‘mezuzah’ and bestowed his blessing on a company specializing in precision cancer medicine.

A mezuzah is a piece of parchment inscribed with specified verses from the Torah, written by a recognized scribe, rolled up and placed in an often-decorative case before being placed on the doorposts of Jewish homes and businesses, bringing spiritual protection.

Rabbi Yitzchak Ginsburgh, the world’s greatest authority on Jewish mysticism, affixed a mezuzah recently on the doorpost of the new NovellusDX building in Jerusalem.

NovellusDX’s mission is to deliver evidence-based clinical insights and enable oncology professionals to treat every cancer and each patient with the precise treatment necessary.

In this video, the rabbi explains the meaning behind the mezuzah as well as the importance of faith in the treatment of disease.

He concludes with his blessing for NovellusDX to become a center of healing that will benefit the Jewish world and all of humanity.