“Thank you for following the lead of the US in recognizing Jerusalem as the eternal capital of Israel,” UWI director Michael Gerbitz told Guatemalan President Jimmy Morales. United with Israel (UWI) attended a festive reception for Prime Minister Jimmy Morales and the Guatemalan delegation Wednesday evening at the King David Hotel several hours after the launch of that country’s embassy at the Malha Technology Park in Jerusalem.

“Thank you for following the lead of the US in recognizing Jerusalem as the eternal capital of Israel,” UWI founder and director Michael Gerbitz said upon greeting Morales.

“This is setting a very important trend. We hope that many other countries will follow your honorable and wonderful example of support for Jerusalem and Israel, and we thank you so much,” Gerbitz stressed.

The friendship between Israel and Guatemala goes back decades. 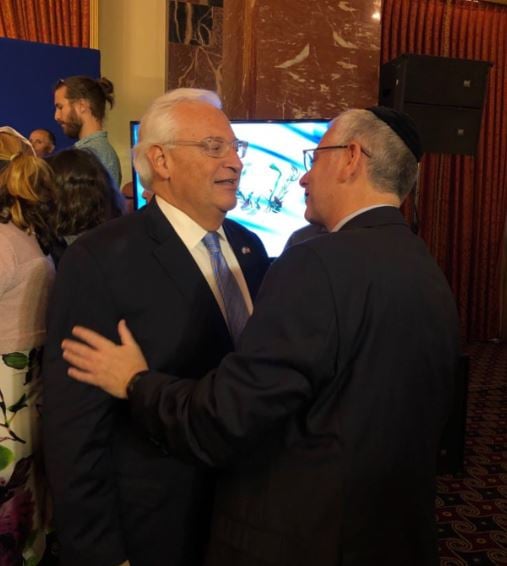 UWI Director Michael Gerbitz with US Ambassador to Israel David Friedman at reception for Guatamalan president.(UWI)

Guatemala was the second country, after the US, to open its embassy in Jerusalem this week.

In fact, in 1956, Guatemala was the first country to open an embassy in Jerusalem. It was closed in 1980 after the United Nations Security Council passed a resolution calling on all members to withdraw their diplomatic missions from Jerusalem.

The resolution was in response to a new Israeli law declaring that its capital was a “complete and united” Jerusalem. The eastern half of the city had come under Jordanian rule in 1948, when the surrounding Arab states launched a war against the fledgling Jewish state. In 1967, the IDF liberated eastern Jerusalem and reunified the city. 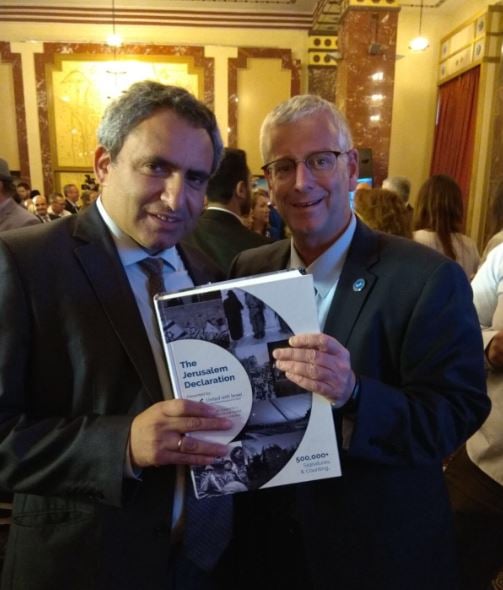 Last spring, just in time for the 50th anniversary of the liberation of the Old City of Jerusalem and the reunification of the Israeli capital, United with Israel, the world’s largest grassroots, pro-Israel community, published The Jerusalem Declaration – a thick, 1124-page hardcover book with 500,000 signatures of supporters from 168 countries around the world along with an introduction and names and nationalities of the signatories declaring a united Jerusalem as capital of the Jewish state.

At the reception, Gerbitz presented the book of signatories to President Morales, who was overjoyed to hear of the massive global, grassroots support for Jerusalem as the eternal capital of Israel.

Gerbitz also presented the book to Israeli Minister of Jerusalem Affairs Ze’ev Elkin, who spoke at the reception.

Exactly a year ago, upon the 50th anniversary of the reunification of Jerusalem, the book was presented to Israeli officials, including Prime Minister Benjamin Netanyahu, Jerusalem Mayor Nir Barkat, Education Minister Naftali Bennett and Speaker of the Knesset Yuli Edelstein.

There are now nearly 800,000 signatures and the number continues to grow.