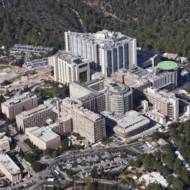 Doctors noticed that “the two had matching scars on their chests from similar shrapnel wounds sustained in battle,” Ynet reports.

By United With Israel

Two Israelis captured during the 1948 War of Independence and held prisoner in Jordan for many months have been reunited in the hospital in a current battle to overcome heart disease, reports Ynet.

David Ashri and Yehuda Neuman had fought together in the Battle of Gush Etzion, south of Jerusalem, says the Israeli news outlet.

After at first periodically getting together with other former POWs, they began to lose contact over the course of time, according to Ynet.

Now, seven decades after they were involved in defending the newborn Jewish State, they have met at Hadassah-Ein Kerem Hospital in Jerusalem.

“Both men needed cardiac catheterization and were treated separately by the same doctors,” says the news outlet.

The connection was made when “catheterization director Prof. Chaim Danenberg and cardiologist Dr. David Planer noticed that the two had matching scars on their chests from similar shrapnel wounds sustained in battle,” Ynet reports.

The doctors took the initiative to get the former prisoners back together.

“They united the two who have spent their recovery period together reminiscing about their days as prisoners of war,” says the report.

“We haven’t met in years, but the spiritual bond between two people who fight alongside one another doesn’t fade,” Ashri told Ynet.

“We fought together in Gush Etzion, fell as prisoners together, and continued getting to know each other. It’s like we saw each other yesterday,” he added.

Now, in 2019, their meetings together are no longer just a thing of the past, but reality, as they can look back on how the Jewish State, for whose very existence they fought, has developed into a leading country in so many fields.

“We enjoy taking care of our patients, and when you take care of them, you listen,” Danenberg told Ynet.

“When you don’t see the person behind the ailment, the work is purely technical, but if you listen to their stories, it’s an absolute pleasure,” he said.

And now, because he listens to the stories of his patients, he has facilitated an emotional meeting between two former comrades.