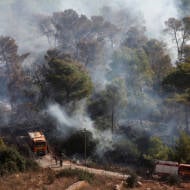 Arab terrorists continue their war against the Jewish state with what is being dubbed a fire intifada, or an arson intifada.

On Friday evening, during the Jewish Sabbath, all residents of Neve Tzuf, aka Halamish, in Samaria fled the town, after Arab terrorists set fire in three different locations.

There were no fatalities.

Fifteen houses were burned to the ground; tens of homes were seriously damaged.

“The town has suffered a blow tonight, but we’re strong and we’ll with it,” a Neve Tsuf spokesman said in a statement, according to Arutz 7. “Welfare staff and the Binyamin Regional Council [where the town is situated] are working to take care of all the residents’ needs.”

Fires have been ravaging across the country since Tuesday; more than half, at least, were the result of arson committed by Arabs.

Other Arabs, including firefighters from the Palestinian Authority, have been helping in the crisis.

On Friday, the small community of Nataf in the Jerusalem Hills, just west of the capital, was scorched. Maya Ben Zvi, owner of Rama’s Kitchen, a popular restaurant, was hosting a wedding party when called to evacuate, Times of Israel reported. The restaurant was totally destroyed, and her home sustained severe damage. It was the third time she had to flee since Tuesday.

The previous evening, firefighters evacuated the nearby community of Beit Meir, which was set ablaze.

On Thursday, 85,000 residents of Haifa were evacuated, with over a hundred needing medical treatment for smoke inhalation.