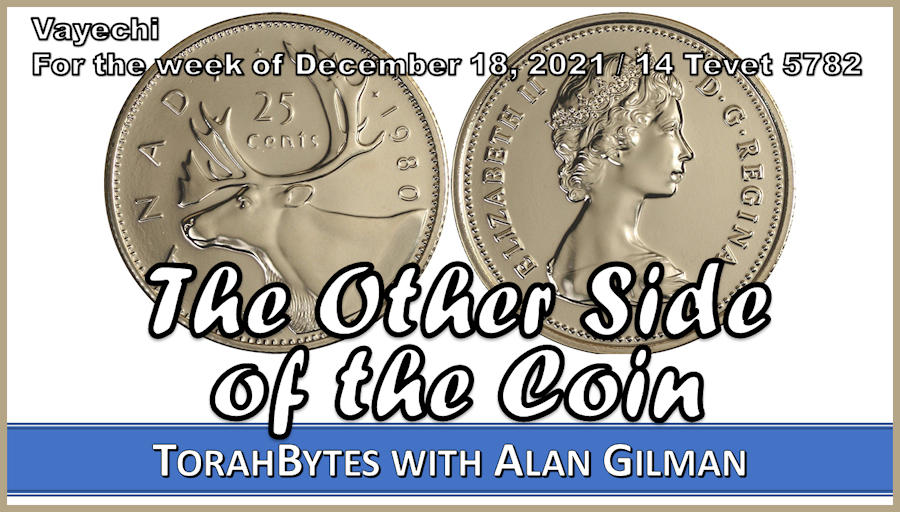 The Other Side of the Coin

What I attempt to share here is quite personal and sensitive. So, forgive its cryptic nature. I trust it’s clear enough to effectively communicate this important lesson from the life of Joseph.

I was trying to get perspective after a difficult week. A few days before, I got the shocking news that I was being released from a volunteer position that I absolutely loved. My performance was not in question. It seemed that there may have been some issues between me and leadership, but I was not given the whole story. I was rejected, I couldn’t figure out why, and there was nothing I could do about it.

As I took some focused time to pray about this, my mind turned to the story of Joseph and his words, “As for you, you meant evil against me, but God meant it for good” (Bereshit/Genesis 50:20). These are some of the most profound words in all of Scripture. That a human being could endure the amount of suffering that he did from his own family without resentment overwhelms me. His brothers were so jealous of him, they wanted to kill him. As it turned out, they sold him into slavery instead, which eventually resulted in his spending many years in an Egyptian dungeon after being falsely accused by his master’s wife. Even though it became obvious that God used his painful circumstance for good, few people would be immune to extreme bitterness. Yet somehow Joseph rose above it all. Not that he didn’t see his brothers’ wrong for the evil that it was, but at the same time he accepted God’s higher purpose.

“You meant it for evil; God meant it for good.”  One set of circumstances; two intentions. Like two sides of the same coin.

The image of turning over a coin to see the other side came to me some time before. It happened while I was mulling over another rejection; probably the most painful, I have ever experienced.  Another firing, this time directly related to my faith in Yeshua. Through the years I would often relive the experience. I can’t tell you the number of dreams I have had where I would find myself pleasantly back in that situation, broken relationships restored. Innumerable times I have wondered that if only this or that would have or would not have happened, then perhaps things would have worked out differently.

It was during one of those times that the coin flipped. It was probably thirty years after the event. All of a sudden, I realized how God used that painful event for my good, my best actually. I finally saw the other side of the most bitter coin that I have ever carried.

With that in mind I was trying to process the situation I mentioned at the start. Thinking of “you meant it for evil; God meant it for good,” I decided to go through my life and think of all my past unpleasant events (I’ve had several) and note how God used them for good. Some I had already previously processed. Still, it’s encouraging to remember how God works through painful circumstances, and I needed encouragement that day.

As I started my memory journey, I was not prepared for another coin to flip. I asked God to show me the other side of the coin of my father’s leaving me and my mother when I was fourteen. I had never taken the time to think that through in this way. I simply assumed that I needed God to heal the father-wound that I have carried around almost my entire life. But then the coin flipped! I was hoping to get insight on my latest disappointment, but instead I got clarity on something far more foundational.

Without getting into the details, I realized that my father’s leaving was also for my good. While I saw him for some months after his leaving. It wasn’t long before he was completely out of my life. As I prayed, I realized that a close relationship with him would have not been good for me, especially in regard to my development as a young man.

Have you been carrying a coin of pain and bitterness? Perhaps it’s time to flip it over and see what’s on the other side.