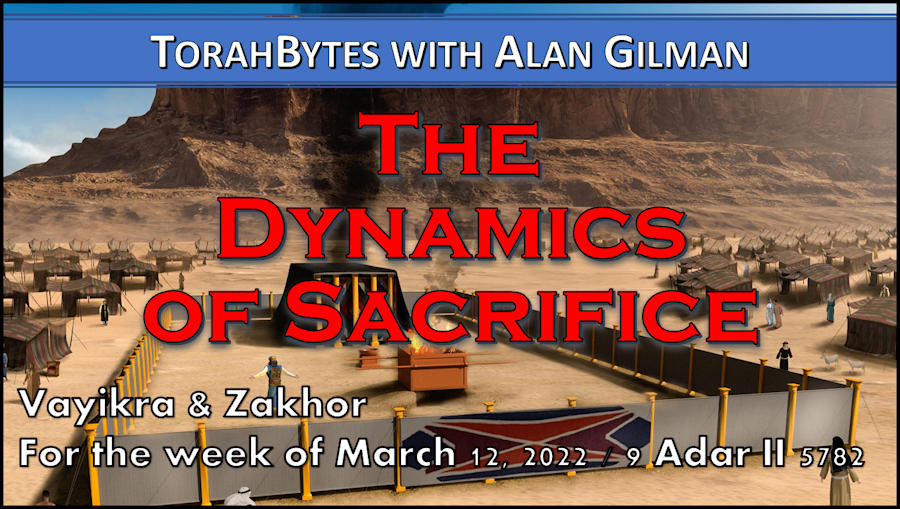 The Dynamics of Sacrifice

The LORD called Moses and spoke to him from the tent of meeting, saying, “Speak to the people of Israel and say to them, When any one of you brings an offering to the LORD, you shall bring your offering of livestock from the herd or from the flock.” (Vayikra/Leviticus 1:1-2)

The directives in Torah regarding sacrifices and offerings are far more concerned about the what than the why. God through Moses was speaking to a culture where animal and other sacrifices were the expected norm. Sacrifice goes back to at least Cain and Abel, the sons of Adam and Eve. Some think it goes back further when God provided animal skins to cover Adam and Eve to replace the skimpy fig leaf “clothes” they made. Regardless, the Bible assumes sacrifice as a primary human activity without explaining why. The lack of why has not prevented it from being core to many societies throughout human history, continuing until today.

Similar to the why question is what does sacrifice do? It appears that many cultures understood it to be a way to appease the gods. It was believed that the gods were behind the challenges of nature. Somehow the offering up of an animal, often through burning it, transferred it to the domain of the gods. If the gods accepted it, good things would happen. If not, you continued to be a victim of their wrath through drought, famine, floods, and so on.

There are some hints that biblical sacrifice worked in a similar fashion. God speaks of receiving an acceptable sacrifice as a pleasing aroma (e.g. Vayikra/Leviticus 1:9). Torah teaches that blood is imbued with a certain quality that makes sacrifice effective (see Vayikra/Leviticus 17:11). Yet, it is very clear that the Bible rejects any sort of mechanical dynamic regarding sacrifice. For if a person’s attitude toward God wasn’t one of humility and genuine honor, the sacrifices would accomplish nothing (e.g. Hosea 6:6). It was never the sacrifices themselves that made the difference. It always was (as it still is) more to do with how people personally relate to God. Biblically speaking, rituals were always intended to be an outward expression of an inner reality.

The great exception to this is the Messiah. His sacrifice actually made a practical difference by breaking the power of sin in the world. A case could be made that every other sacrifice is a sort of symbolic gesture reflecting the uniqueness of Yeshua’s selfless death.

The call to sacrifice continues despite the effectiveness of Yeshua’s own. I am not referring to the Old Covenant sacrifices established through Moses, for they are now obsolete due to the establishment of the New Covenant as prophesied through Jeremiah (see Jeremiah 31:31-34). This is thoroughly explained in the Book of Hebrews. Under the New Covenant the focus on sacrifice shifts from giving up what we own to the giving up of our very lives. We read, “I appeal to you therefore, brothers, by the mercies of God, to present your bodies as a living sacrifice, holy and acceptable to God, which is your spiritual worship” (Romans 12:1). Far from seeking to court favor from the gods in order to reap benefits, we give our whole selves out of gratefulness to the one who graciously restored us to himself.

Yeshua called his followers to a lifestyle of sacrifice. He said, “If anyone would come after me, let him deny himself and take up his cross and follow me. For whoever would save his life will lose it, but whoever loses his life for my sake will find it” (Matthew 16:24-25). And yet these words are often misunderstood to refer to the need to reckon with the great difficulty of following him. “Oh, what a heavy cross I have to bear!” one might say. That misses the point, however. Instead, this is in line with the call to be a living sacrifice. Yeshua is saying that his followers must be ready to do God’s will even if it results in giving up our lives just as he did.