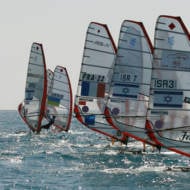 Two Israelis who competed at the European windsurfing championships over the weekend returned to the Jewish state with medals.

In addition to Omer and Tzuberi, Yoav Cohen placed fourth in the competition, which attracted windsurfers from around the world.

While the Israeli women didn’t take home medals at the competition, they still performed well, with Maya Morris and Noy Drihan placing fourth and fifth, and Katy Spychakov placing seventh.

The RS:X European Championship is an annual race recognized as the second most important Olympic windsurfing regatta in its class.

Omer, who is only 18 years old, nabbed gold at the Youth Sailing World Championships in Poland back in 2016, while Tzuberi took bronze at the 2008 Beijing Olympics.

Tzuberi also won gold medals at the 2009 and 2010 European Championships.

Unlike sporting events held in certain regions of the world, the Israeli athletes faced no discrimination, boycotts, or shabby treatment at the European Windsurfing Championships in Poland this weekend.

This has unfortunately not been the case at sporting events held in Arab or Muslim nations, where athletes from the Jewish state are frequently barred from competition, prevented from displaying national symbols, and have even been faced with athletes who forfeit matches instead of competing against Israelis.

Most recently, 7-year-old Haifa native and chess champion Liel Levitan was barred from the World Chess Championship by host nation Tunisia, which eventually backtracked on its discrimination after the World Chess Federation threatened to move the event.