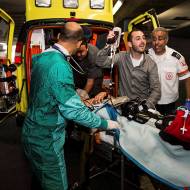 Since the beginning of 2015, there have been 1,703 terror attacks against Israelis, nearly half of which were committed since the Jewish New Year in September.

The wave of Arab terror throughout Israel has intensified over the past month, with more than half of the number of attacks against Israelis since the beginning of 2015 – 778 out of 1,703 – launched since the Jewish New Year in September.

Since Rosh Hashana, Arab terrorists claimed the lives of 11 civilians and injured more than 100 civilians and soldiers, some critically.

Despite the alarming increase in violence – not only in Jerusalem and Judea and Samaria, but throughout the country – the High Court of Justice in Jerusalem last Thursday issued an injunction temporarily freezing the demolition of the homes of the families of six terrorists who murdered Israelis.

On October 1, terrorists killed Na’ama and Eitam Henkin in a drive-by shooting in the presence of their four young children.  In June, terrorists shot Malachi Rosenfeld, 27, north of Jerusalem; he died shortly afterwards in a hospital. That same month, Danny Gonen, 25, was shot and killed by a terrorist near the community of Dolev in Samaria.

On Tuesday, the State of Israel submitted to the Court responses to nine petitions filed against the confiscation and demolition orders for the homes of the terrorists responsible, Israel National News reports.

“The above data indicates a significant change in circumstances and the escalating scope, intensity and level of murderous terrorism, that require knowing that political and security officials are taking measures to deter potential terrorists from carrying out attacks in general, and such as those that recently circulated, in particular,” the report said. Prime Minister Benjamin Netanyahu has stated that the demolition of homes is an effective way to deter violence attacks. “Our problem is the disconnect between the act and the consequences of the act,” Netanyahu said in response to the Court’s ruling. “Therefore, we want to minimize the time and I hope that the the High Court will make its decision as quickly as possible… If they decide, and usually they decide yes to demolish, it’s better to do so close to the incident, within a number of days rather than weeks or months.”

Minister of Immigrant Absorption Ze’ev Elkin urged the Court “not to drag its feet” on the issue, stressing that Israelis are “in the midst of a war against terrorism, and a democracy that doesn’t know how to defend itself cannot be victorious in such a war.”

“Preventing the next terrorist attack by destroying terrorists’ homes and creating deterrence is the order of the day, and it cannot be that the High Court jams sticks into the spokes of cabinet decisions,” he stated.

Families of the victims, shocked by the Court’s hesitation, filed their own petitions to the Court.

By: United with Israel
(With files from Israel National News)