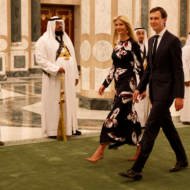 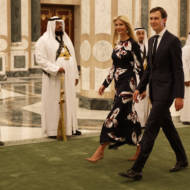 President Trump’s son-in-law looking to resolve the dispute between Qatar and its Gulf neighbors.

President Trump’s senior advisor and son-in-law Jared Kushner will fly to Saudi Arabia and Qatar in the coming days in what could be the Trump administration’s last chance to persuade the kingdom to normalize ties with Israel.

Reuters, quoting an American official, reported that Kushner hopes to finalize additional normalization agreements between Israel and other Arab states to build on his success with the Abraham Accords, the name given to Israel’s peace deals with the United Arab Emirates, Bahrain and Sudan.

The trip is also a final effort to mediate a solution to the dispute between Qatar and its Gulf neighbors, reports said Monday.

In 2017, Saudi Arabia, the United Arab Emirates, Bahrain and Egypt cut diplomatic relations with Qatar and launched a boycott on the grounds that Qatar supports terrorism, including the Muslim Muslim Brotherhood. Qatar’s rivals also say it’s too friendly with Iran, a country that regularly threatens the Gulf countries as well as Israel.

“Fixing the rift between Saudi Arabia and Qatar would bring a sense of stability back to the Gulf and notch a last-minute achievement for Kushner and the Trump administration” before the January 20 inauguration of president-elect Joe Biden, wrote Axios reporter and veteran Middle East diplomatic affairs analyst Barak Ravid.

America has close ties with all the countries involved, and there are also U.S. military bases in Qatar and neighboring Saudi Arabia, the UAE and Bahrain. Previous attempts by the Trump administration to broker a solution failed, and Kushner is expected to meet with Saudi Crown Prince Mohammed bin Salman (MBS) and Qatari Emir Tamim Bin Hamad al-Thani, both of whom he has met before.

The Kushner mission will include White House envoy special Middle East envoy Avi Berkowitz, who helped with the negotiations that paved the way for the UAE and Bahrain to sign peace deals with Israel, and former special envoy for Iran envoy Brian Hook, who is now a special adviser to the White House and was involved in the previous efforts end the intra-Arab conflict.

Kushner will meet MBS after Prime Minister Benjamin Netanyahu secretly flew to Saudi Arabia last week, although the content of the Netanyahu-MBS meeting was not disclosed.

Qatar plays a key role in supplying tens of millions of dollars in U.S. cash each month to the Gaza Strip, where poor families receive the charity to help keep the pressure off of the Hamas terror group, which has ruled Gaza with an iron military fist for the past 13 years and driven its economy into the ground.

Kushner’s good relations with MBS helped pave the way for the Abraham Accords – the peace deal with the UAE and Bahrain – that Saudi Arabia is not yet ready to join, possibly saving Saudi recognition of Israel as a bargaining chip to gain points with the incoming Biden Administration.

The two will also meet in the shadow of last week’s assassination of Iranian nuclear chief Mohsen Fakhrizadeh, with Iran threatening to retaliate for the killing. Qatar condemned the assassination, but the Saudis have remained silent on it, Ravid reported.

The post Saudi-Israel Normalization? Jared Kushner Slated to Visit the Kingdom for Talks first appeared on United with Israel.