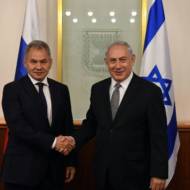 The Russian Embassy in Israel marked its “National Day” celebration on Thursday for the first time in Israel’s capital of Jerusalem.

“This is a holiday for Russia, and it’s a celebratory day that was initiated and takes place in Jerusalem, and I assume that there will be many more days like this one in Jerusalem,” Israeli Prime Minister Benjamin Netanyahu said in his remarks held at Sergei’s Courtyard, a historic Czarist-era compound built in the late 19th century, which the Israelis transferred to the Russians more than a decade ago.

“I know that we’re going to celebrate many, many years of cooperation between Israel and Russia in Moscow and also next year in Jerusalem,” said Netanyahu.

Last year, Russia surprised many by recognizing western Jerusalem as Israel’s capital. However, that recognition was contingent on the Palestinians establishing their capital in eastern Jerusalem.

“We stand ready to facilitate such an agreement,” he added.

Netanyahu also spoke about the “great respect for Russia for its contributions to civilization and for the courage of its people,” and noted the role that the Red Army played in the defeat of Nazi Germany, saying “we never forget the sacrifice of the Russian people and the Red Army in the defeat of the Nazi monster.”