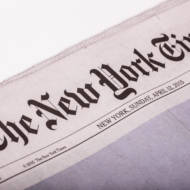 Vocal pro-Israel commenters are dominating the comments section of a New York Times dispatch that blames Israel for the wedding-related debt of a resident of the Gaza Strip.

Usually the Times’ online comments section is virulently representative of the newspaper’s hard-left, anti-Israel paying subscriber base. This story, though, is an exception, as the paper’s blame-Israel-for-anything-bad-that-happens-to-anyone approach is being met with reader comments assertively calling out the Times’ bias.

Sure enough, the Times manages to find a way to blame Israel for the plight of this Gazan man: “Since Hamas took power in Gaza in 2007, Israel and Egypt have heightened pressure on the militant group by enforcing a blockade on the strip. That has helped damage the Gazan economy and is one of the major causes of an unemployment rate of more than 40 percent. For young Gazans, one result of this is that they often cannot afford a wedding ceremony.”

The Times readers weren’t buying it. “Hamas is a clan-based kleptocracy. International aid money is routinely diverted to relatives of the leadership. Very little gets through to the needy. There is plenty of money, however, for tens of thousands of rockets and hundreds of underground tunnels to attack Israel. If Hamas ever stops shooting rockets at Israel, they will have peace,” wrote one New Jersey-based commenter, winning 148 upvotes.

Another comment, from Los Angeles, with 50 upvotes, observed, “While I sympathize with Mr. al-Garosha, I really don’t want to hear that this is Israel’s fault. The Palestinians created their own downward spiral by refusing to become their own nation in 1947, and repeated that error again in 2000. Instead, they have embarked on a hopeless campaign to eliminate Israel and co-opt its land, relying on feckless creatures like Yasser Arafat and then terrorist groups like Hamas for leadership.

“Terrorist groups do not treat its subjects well, period. Instead of Mr. al-Garosha and countless others subjecting themselves to a medieval system of penury for marriage and then jail, they should rise up and eliminate Hamas and for the first time in decades provide themselves with rational leadership.”

A third comment, from Rosalie Lieberman of Chicago, upvoted by 19 readers, said, “Unaffordable weddings are not uncommon in the Arab world. Or maybe in all Muslim societies. I recall reading an article, a number of years back, about a wedding either in Iraq or Afghanistan, where total strangers, hungry for a good meal, crash the wedding, and the bride’s family assumes these guys are friends of the groom, and the groom’s family assumes they are relatives of the bride. It further drives up the cost of catering.

“Poverty and high unemployment is typical of all these Middle Eastern countries. This article goes into some detail, and how it impacts a particular family, but with much of the population under 30, and not enough jobs to go around, as is true in Egypt and elsewhere, it’s a miserable situation.

“Is this article set up to castigate Israel? Imagine someone trying to make a wedding in Beirut these days. At least you can’t blame Israel, but of course, that can always be s-t-r-e-t-c-h-e-d to do so.”

Lieberman has a good memory: A 2008 Times article was headlined “Big Weddings Bring Afghans Joy, and Debt.” A 2003 Times article examined staggering wedding debt driving American couples to divorce, credit counseling, or bankruptcy. Neither Afghanistan nor the United States are under an Israeli or Egyptian “blockade.” Neither, for that matter, is Gaza, as the so-called “blockade” has been so porous as to allow for regular entry, legal and illegal, of all sorts of supplies.

But rather than portraying Gaza as part of a global pattern of people struggling to pay for weddings they can’t afford, the Times chooses to blame Israel (and its Camp David peace treaty partner Egypt) for the plight of the indebted Gazan. Give the Times readers who commented on this article credit for seeing through that nonsense.