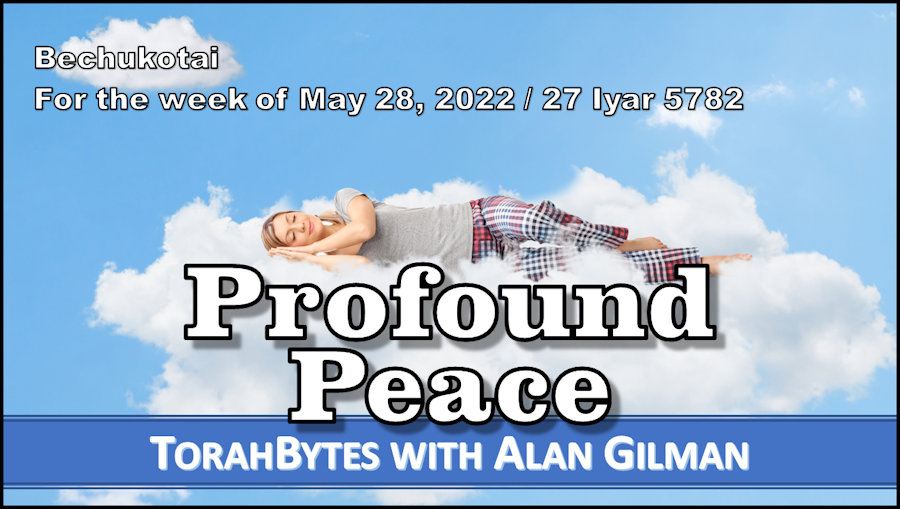 I will give peace in the land, and you shall lie down, and none shall make you afraid. (Vayikra/Leviticus 26:6)

What a wonderful thought! Especially that this is a promise to an entire nation. That there might be a condition by which God would provide such a sense of security, so that people could rest at night unconcerned about danger of any sort. This is even more remarkable when we consider that the people who first heard this lived fundamentally vulnerable lives. They had nowhere near the number of effective structures and resources that many enjoy in our day.

The Hebrew word translated afraid here is “charad,” and means “to tremble.” It’s a loss of control, a fear that intimidates, causing us to run away, be it literally, so that we vacate our location, or metaphorically, where we are unable to engage the situation in which we find ourselves.

What God promises to provide Israel is peace, “shalom.” Shalom is more than calm. It may result in calm, individually or societally, but it’s a way to describe when everything is in its rightful place, working as it should and in right relationship with everything else. In this context, it’s a basic state of social health, whereby the individuals of the society are functioning well and in right relationship with others. We can see why this leads to a lack of fear.

In the context of the Sinai covenant, societal health and the resulting calm is derived from a lifestyle of godliness. The section in which this promise is found begins with: “If you walk in my statutes and observe my commandments and do them” (Vayikra/Leviticus 26:3). Some Christian interpreters regard this negatively as being part of an impossible system whereby the promised blessing could never be achieved. They think of this as God’s imposing an impossible standard in which Israel was doomed to fail. Israel did fail, but God wasn’t seeking to simply shame his chosen nation; rather he was instructing them and the world through them that real security can only be found in right relationship to him and his ways.

The misguided notion that Torah (often misunderstood as “law” in a cold legal sense, rather than “teaching” or “direction”) functions only to establish guilt, fails to notice how its blessings were enjoyed by those who genuinely followed it. We see this in both individuals, such as Moses, Joshua, David, and Elijah to name a few, and in the nation of Israel as a whole. Granted, these periods, such as the height of Solomon’s reign, are brief, but they were real. As far as Scripture is concerned, their experiences serve as important positive examples of the Torah promise above.

While these examples demonstrate the positive intent of Torah, they do, at the same time, highlight the failure of most people to experience such a sense of security. Fear is rampant. Whether it has increased in the COVID era is hard to say. I suspect that the constant reports of disease and death along with restrictions and precautions exposed the preexisting insecurities most people live with.

The Torah promise of security should challenge us to confront our fears. Living, always wondering when disaster will attack, be it a debilitating disease or social unrest, is not what we were designed for. God’s heart for his beloved creatures is to live without fear.

No one illustrates this better than the Messiah. Despite living in a most hostile environment, including his closest companions regularly misunderstanding him, he was never flustered. It’s not that he didn’t have emotions. He even got upset from time to time. But he never was looking over his shoulder, worried about what might happen to him.

One of the greatest examples was when he was crossing Lake Kinneret (Sea of Galilee) during a storm. His disciples were freaking out while he was sleeping. I can’t relate. I have enough trouble sleeping in my comfortable bed in my quiet house.

It’s unhelpful when we view the Messiah’s sense of confidence through a lens of “He’s the Messiah; what do you expect?” We forget that he was fully human, living a truly godly life. He reflected a genuine Torah-oriented lifestyle as was offered to Israel.

And because he did so even to the point of death, followed by conquering death through his resurrection, he has opened a way for us to share in his life. We do that by admitting our failure to live by God’s standards and by relying on Yeshua, through who we not only derive the benefits of his obedience but are drawn into the type of lifestyle that results in profound peace.