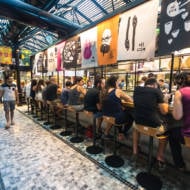 The prestigious American magazine Conde Nast Traveler has named Tel Aviv as one of the world’s top 15 culinary cities.

In November 2015, Conde Nast Traveler previously spotlighted the Israeli city’s food scene when it published an article titled “Why the World’s Best Vegetarian Food Is in Tel Aviv,” which called the city an “herbivore smorgasbord” and cited the mix of gastronomic influences from around the world that “can coax a world of flavors out of the most humble potato.”

The following month, the magazine featured a “Chef’s Pick” overview of some of the best places to eat and drink in Tel Aviv.