A type of rat that lived about 100,000 years ago in the Judean Desert reveals evidence of a “climatic corridor” from Africa to Europe in which a less-dry climate prevailed. This may have helped ancient humans cross the deserts between the African savannah and the Levant.

So argues a new study published in the journal PNAS (Proceedings of the [US] National Academy of Science), led by Dr. Ignacio Lezgbester of the University of Haifa and Berlin’s Museum of Natural History, along with staff at Tel Aviv University, the Hebrew University of Jerusalem, the Israel Geological Survey, the Israel Antiquities Authority and Montpellier University in France,

Illustration that combines the appearance of the area where the bones were today and an illustration of how it once looked (based on the driest place where the mane rat is today, in Djibouti. Illustration of the rat: Aya Mark, design: Dr. Ignacio Lezgbester).

The rodent, known as the maned or crested rat (Lophiomys imhausi), is  long haired and bushy tailed that today lives in East Africa. Resembling a porcupine, it is named for its mane of long, coarse black-and-white-banded hairs that begins at the top of the head and extends beyond the base of the tail. Each one weighs about a kilogram.

Ancient remains of this type of rodent was discovered in excavations by the Israel Antiquities Authority and the Hebrew University in 2016. The mane rat that now lives in East Africa and this specimen are very, very close animals, so if today this species lives in humid areas, chances are that even about 100,000 years ago the subspecies we found would have needed the same conditions,” the researchers wrote. 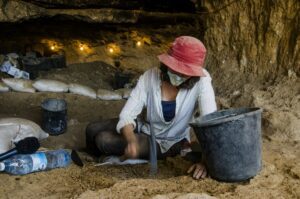 From the excavations in the cave – Credit: Yuli Schwartz, Israel Antiquities Authority

Over the last hundreds and even millions of years there has been a migration of ancient human species from Africa to the Levant and from there to Europe. In the earliest migrations, which began as early as 1.8 million years ago, researchers believe that “ecological corridors” between the savannah of Africa and the Levant allowed these ancient humans to cross the Saharan Arabian deserts that divide the two climatic regions.

However, when it comes to the migration that occurred about 100,000 years ago, of modern humans, it is not clear to researchers whether the migration was made possible thanks to such “corridors” or whether some technological leap allowed them to cross the deserts.

The current study was conducted as part of the DEADSEA ECO project funded by the European Research Council (ERC). The project, which is headquartered at the University of Haifa, has been studying the interactions between animals in the Judean Desert and humans over the past tens of thousands of years. During their work, the researchers analyzed a complex of hundreds of bones from a cave in the southern Judean Desert.

The remains were revealed during an experimental archaeological excavation by the Israel Antiquities Authority and the Hebrew University whose primary purpose was to search for hidden scrolls. This excavation yielded hundreds of finds from various periods, including the fascinating find of bones of the rat subspecies, which today lives in an environment of dense green vegetation.

A carbon 14 test was able to date one of the bones to a period 42,000 years ago. The rest of the bones could not be dated by this method because they were more than 50,000 years old. Researchers at the Geological Survey came to the aid of the researchers and were able to date gypsum fragments that were discovered together with the bones and use them to date the lower limit for the appearance of rodents 120,000 years ago. This is how the researchers got the window of time during which these rats lived in the Judean Desert.

The researchers also found that the genetic proximity indicates a split between modern mane rats and those found in the Judean Desert about 120,000 years ago, in line with other dating methods. According to the researchers, like its relatives in Africa, this subspecies was also characterized by special protection against predators, which include extra-thick skull bones and poisonous fur. The source of the poison in a bark that the mane rat chews and spreads on absorbent hairs on the sides of her body.

“But more importantly, genetic proximity allows us to assume that the primitive subspecies also lives in a climatic environment similar to the one in which it lives today,” the researchers wrote, “because the same African species came to the Judean Desert through an ancient climatic corridor. It is also likely that humans who migrated from Africa to the Levant at that time were also aided by the same ecological corridor,” the researchers suggested.