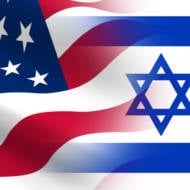 An overwhelming majority of Americans, including Democrats and voters in battleground states, consider themselves pro-Israel, oppose reducing U.S. security aid to Israel and want the Democratic Party platform to remain at least as pro-Israel as it was in 2016, according to a new poll.

Moreover, when it comes to votes, pro-Israel Democrats do better against Republicans than those who are not aligned with the Jewish state, according to the poll, which was released on Monday by the Mellman Group on behalf of Democratic Majority for Israel.

Moreover, according to the poll, two-thirds (66 percent) of all voters, along with 63 percent of Democrats and 68 percent of battleground-state voters, oppose reducing U.S. security assistance to Israel—a point of contention amid Israel’s plans to apply sovereignty to, or what some call annex, parts of the West Bank – Judea and Samaria.

Only 18 percent of voters, including just 29 percent of Democrats, responded that they want the Democratic Party’s 2020 platform to be more “pro-Palestinian,” whereas, after reading the text of the 2016 platform planks on Israel, 70 percent want a platform at least as pro-Israel as this one, if not more so, while only 15 percent prefer a less pro-Israel platform this year, according to the poll.

Moreover, the poll consisted of 71 percent of Democrats who were just as likely to prefer a platform no less pro-Israel than the document adopted in 2016.

Last week, the drafting committee voted to approve the language of the Democratic platform in a virtual meeting on Wednesday ahead of the July 27 vote by the full 187-member platform committee, including the party’s conventional language surrounding the U.S.-Israel alliance.

The platform includes language that expresses support for the U.S.-Israel relationship, a pledge to security funding for Israel and backing for a two-state solution “that ensures Israel’s future as a Jewish and democratic state with recognized borders and upholds the right of Palestinians to live in freedom and security in a viable state of their own.”

The platform also expresses opposition to “unilateral steps by either side” that jeopardizes the prospects for two states, in addition to an objection to Israeli settlement expansion.

Regarding the status of Jerusalem, the platform states: “We believe that while Jerusalem is a matter for final-status negotiations, it should remain the capital of Israel, an undivided city accessible to people of all faiths.”

This reflects the stance of the presumptive Democratic presidential nominee, former U.S. Vice President Joe Biden, that the U.S. embassy, which U.S. President Donald Trump moved from Tel Aviv to Jerusalem in May 2018, five months after recognizing Jerusalem as Israel’s capital, should remain put.

The platform expresses opposition to “any effort to unfairly single out and delegitimize Israel, including at the United Nations or through the Boycott, Divestment and Sanctions [BDS] movement, while protecting the constitutional right of our citizens to free speech.”

“While some deny the facts, the reality is, American voters have overwhelmingly positive attitudes towards Israel and are strongly supportive of the U.S.-Israel alliance,” said DMFI president and CEO Mark Mellman in a statement.

“Support for Israel is wise policy. This poll shows that it is also smart politics for Democrats, especially in critical battleground states.”