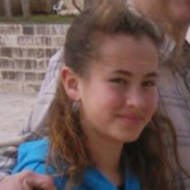 The Palestinian leadership lauded a 17-year-old Palestinian terrorist who stabbed and murdered a 13-year-old Israeli girl, Hallel Yaffa Ariel, while she slept in her bed on Thursday.

The Palestinian terrorist Mohammad Taraireh, who entered the girl’s home in Kiryat Arba near Hebron, also injured an Israeli security official before he was shot and killed by responding Israeli security forces.

The Fatah, Palestinian Authority (PA) head Mahmoud Abbas’ party, posted the terrorist’s picture on its official Facebook page shortly after the attack, declaring him a martyr – “Shahid,” the highest honor achievable in Islam, according to the PA.

“Martyr (Shahid) Muhammad Taraireh, who carried out today’s operation in which one female settler was killed, and a male settler was injured,” the text under the photo read. WAFA, the official PA news agency, likewise honored the terrorist, referring to him as a Shahid.

Shahid is a term of Islamic glorification used for national heroes and those who have died while waging Jihad, Muslim holy war, against the infidels. Becoming a Martyr in Islam represents the highest religious achievement that can be attained by a Muslim, according to PA teachings, and the Martyr is granted numerous rewards.

According to PA law, the murderer’s family will immediately start receiving a monthly PA stipend that the PA pays to families of all the “Martyrs.”

The mother of the terrorist told a local Hebron news network that her son was “a hero” who made her “proud.”

“My son died as a martyr defending Jerusalem and the Al-Aqsa Mosque,” she declared. “Praise be to Allah, Lord of the Worlds, he [my son] has joined the Martyrs before him, and he is not better than them. Allah willing, all of them will follow this path, all the youth of Palestine. Allah be praised.” On Sunday, IDF forces arrested Taraireh’s sister for praising his actions. The IDF said in a statement that the arrest was part of its crackdown on incitement and support for terrorism.

A short video clip published on Palestinian media Thursday showed the sister referring to her brother as a “martyr.”

“My brother is now a Shahid. May God judge the Jews, and may my brother be content with his portion in paradise,” she said.

Taraireh’s father was also arrested by Israeli forces after the attack.

Taraireh’s female cousin was killed on Friday as she attempted to stab a female IDF soldier who was securing the Cave of the Patriarchs in Hebron.

Taraireh’s cousin Yusuf was killed in March after ramming his car into a group of soldiers near Kiryat Arba. Following the incident, Muhammad Taraireh posted several posts of praise for his cousin on Facebook and his own wish to die.