Israel – “the greedy Zionist cancer” – is scheming to expand its territory to extend “from the Nile [River] to the Euphrates [River]” according to regular columnist Bassem Barhoum at the official PA daily:

“The goal is to stop the expansion of the greedy Zionist cancer, at a time when the saying ‘From the Nile [River] to the Euphrates [River]’ is still arousing the desires of leaders in Israel.”

This Palestinian accusation is projection par excellence. As Palestinian Media Watch has documented numerous times,  it is the PA that tells its people that their goal is a “Palestine” that reaches “from the Jordan River to the Mediterranean Sea,” and includes – and destroys – all of the State of Israel.

Senior Fatah official Tawfiq Tirawi recently stressed this view, claiming that “our Palestinian land is from the [Jordan] River to the [Mediterranean] Sea”: 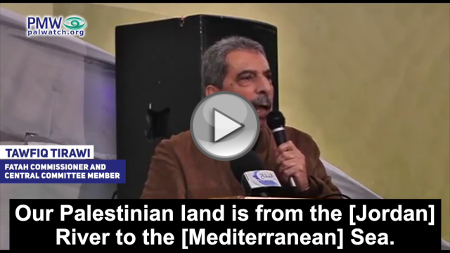 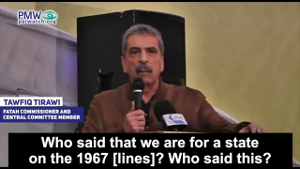 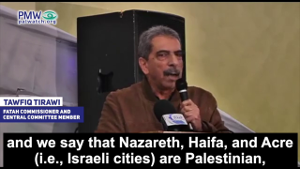 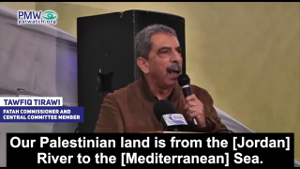 Palestinian schoolbooks assure that Palestinian youth are raised envisioning a Palestinian state that erases all of Israel, as in this map defined in the schoolbook as “The geographical area of the State of Palestine”. 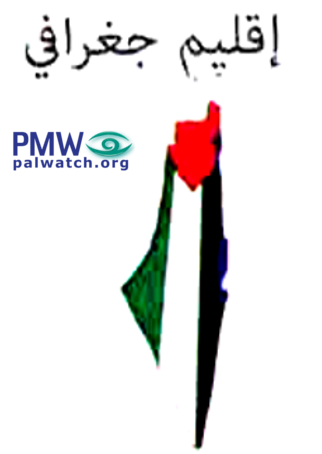 Israel’s Prime Minister Netanyahu’s much talked about and presumed future annexation of the Jordan Valley and the Jewish towns in the West Bank is what led to the op-ed. Projecting the PA’s own ambition of expanding Palestinian sovereignty of the PA areas to include the entire State of Israel, the writer accused Israel of planning to go even further than the announced possible annexation and “expand eastwards” – i.e., into Jordan – “when the opportunity arrives”:

“Israel’s goal in holding the Jordan Valley… is so that this area will be a base for expanding eastwards when the opportunity arrives.”

That Israel seeks to rule “from the Nile to the Euphrates” is a repeated PA libel. Palestinian leaders even claim that the two blue stripes on Israel’s flag represent the Nile and Euphrates rivers, alleging that the Israeli flag is testimony of Israel’s aspiration to create a Greater Israel between the two rivers, as senior Fatah official Abbas Zaki stated last year:

“We hope that the [Arab] brothers… will ask themselves where they stand regarding their holy sites and the fortress that is defending them from the aspirations of ‘Israel’ and its permanent motto – as is clear in its flag between the two blue stripes – ‘From the Euphrates [River] to the Nile [River]’?”

The following is a longer excerpt of the op-ed:

Excerpt of an op-ed by Bassem Barhoum, regular columnist for the official PA daily
Headline: “Annexation of the Jordan Valley – for security purposes or for expansion purposes?”
“Israel’s goal in holding the Jordan Valley, which is supposed to be the State of Palestine’s eastern border with Jordan, is so that this area will be a base for expanding eastwards when the opportunity arrives. This is because a Palestinian state with international recognition within the June 4, 1967 borders means a cessation of the Zionist project’s expansion.
Jordan understands the essence of this expansion project well, and therefore for years it has been strongly supporting the idea of establishing a Palestinian state in all the territories of the West Bank and Gaza Strip. This is what explains the strong position of [Jordanian] King Abdullah II and the State of Jordan, as the goal is to stop the expansion of the greedy Zionist cancer, at a time when the saying ‘From the Nile [River] to the Euphrates [River]’ is still arousing the desires of leaders in Israel.”