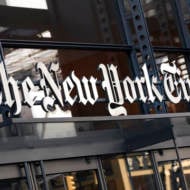 If the deal doesn’t happen, will the Times print a correction explaining how and why it misjudged the likelihood of it? Hopefully, we will get a chance to find out.

By Ira Stroll, The Algemeiner

A routine news article about an Egypt-Israel-United Arab Emirates summit meeting is the latest example of inaccurate and tendentious New York Times journalism about Israel and the Middle East.

The Times writes that the meeting happened “as the United States pursues a renewed nuclear deal with Iran, a rival of both Israel and the UAE, that would lift international sanctions on Tehran in exchange for limits on its nuclear program. The Emirates and another important American ally in the region, Saudi Arabia, have complained about what they see as a lack of American support after attacks that were linked to Iran.”

Notice the double standard. The Times claims that a renewed nuclear deal would bring “limits” on the Iranian nuclear program, rather than merely unverifiable short-term promises of limits.

The “what they see as” language gets applied to the Emirates and Saudi Arabia, but not to the “limits” of the Iran nuclear deal. Even the word “complained” has a slightly whiny connotation. Saudi Arabia is described as an “important American ally in the region,” though the country is not on the list of major non-NATO allies.

The Times article reports that “For decades, Israel was ostracized by all but two Arab countries, Jordan and Egypt. For most Arab governments, Israel’s occupation of territories claimed by the Palestinians precluded any diplomatic entente and even in those capitals, Amman and Cairo, leaders sought to keep their relationships with Israel below the radar.”

The claim that it was “Israel’s occupation of territories claimed by the Palestinians” that “precluded any diplomatic entente” is humorous because it was actually Israel’s very existence that the Arabs objected to.

The Arab nations declined to recognize Israel between 1948 and 1967, during a period when “occupation of territories” was not the sort of grievance that it became after 1967. Nor is it accurate that the Jordanian and Egyptian leaders “sought to keep their relationships with Israel below the radar.”

“Sadat Arrives to Warm Welcome in Israel” was the banner, six-column headline on the November 20, 1977, New York Times front page.

The front page on October 27, 1994, of The New York Times, likewise featured a photograph of the prime ministers of Israel and Jordan together initialing a treaty map. Foreign policy and national security often involve some discretion, but the “below the radar” claim is an overstatement and an overgeneralization.

Will the Times print a correction?

The Times article further claims that “Nuclear talks among the United States, five other global powers and Iran have been nearing a resolution.” The Times has for months been relentlessly, breathlessly, incrementally hyping the claim that the talks are about to conclude, but meanwhile — no conclusion.

If the deal doesn’t happen, will the Times print a correction, or a series of them, explaining how and why it misjudged the likelihood of it? I’m hoping we will get a chance to find out.

In the unlikely event that a deal is consummated, expect lots more deceptive Times coverage about how the deal will bring “limits” rather than unverifiable short-term promises of limits.

In the meantime, the paper will milk the topic for incremental stories that provide opinionated, pro-Iran spin, disguised deceptively as straightforward news coverage.

Another recent Times article states as unattributed fact, in the Times’ voice, the ridiculous assertion that “the Biden administration also moved too slowly to engage Tehran upon entering office.”

The way I’d put it would be that the New York Times editors moved too slowly to prevent their Iran coverage from becoming a laughingstock.