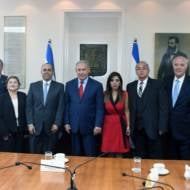 “Ask your governments to move their embassies to Jerusalem. So we can say, ‘Next year in Jerusalem’,” Netanyahu told Latin American parliamentarians.

Prime Minister Benjamin Netanyahu on Wednesday met with a delegation of chairpersons of foreign affairs committees of Latin American parliaments at the Prime Minister’s Office in Jerusalem and announced he will be attending a regional meeting in Guatemala this November.

“You’re very welcome here. Our relations with the countries of Latin America are obviously changing very rapidly for the better. I’m very proud of the fact that I was the first Israeli prime minister to visit any country south of Texas,” Netanyahu told the leaders.

Netanyahu embarked on a 10-day historic trip to Argentina, Colombia and Mexico in September, the first such official visit by a sitting Israeli prime minister. Paraguayan President Horacio Cartes traveled to Buenos Aires to meet with Netanyahu.

Netanyahu wished to impart on the chairpersons an important message regarding Israel’s sovereignty.

“You’re all parliamentarians, and as far as I’m concerned, you’re all ambassadors. Now you’re ambassadors of Israel and of the truth,” he told them. “Please convey to your fellow citizens, this is very important, for us and people who know Israel as it is.”

The US, led by President Donald Trump, was first to make the historic move.

In addition to the US, Guatemala and Paraguay, a number of other countries have expressed interest in moving their embassies in Israel to Jerusalem, among them Honduras, the Czech Republic and Romania.