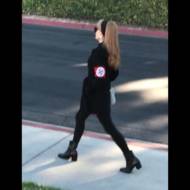 Woman got into altercation with elderly Jewish man.

Authorities in Orange County, California are recommending that a woman who wore a Nazi armband and got into an altercation with an elderly Jewish man be charged with hate crimes.

The woman’s name has not been released because she has not yet been arrested.

The altercation took place on March 7 in Laguna Woods.

According to Orange County Sheriff’s Department spokesperson Jaimee Blashaw, the woman made antisemitic comments and threatened an 80-year-old Jewish man who confronted her about the armband.

The Anti-Defamation League posted a photo of the woman, which it said had been provided by a citizen who wished to remain anonymous. It showed a woman wearing a black outfit, wearing a red Nazi armband prominently displaying a swastika.

Blashaw said two witnesses intervened, one of whom took the armband from the woman.

According to local media reports, a complaint was forwarded to the district attorney’s office. It recommended that the woman be charged with threatening the man and hate crimes related to her antisemitic remarks.

The ADL criticized Laguna Woods for its slow response to the incident.

“We demand that Laguna Woods leaders speak out against this outrageous act of Jew-hatred and condemn acts like this which can and do inspire further incidents of antisemitism and bigotry of all kinds,” ADL regional director Peter Levi said in a statement.

On Friday, Laguna Woods Mayor Carol Moore released a statement condemning the altercation and explaining that delayed response was to allow the authorities to conclude their investigation.

“The city of Laguna Woods stands firmly against antisemitism, bigotry and hate in all its forms, fully and without exception,” Moore’s statement said. “The conduct alleged in the disturbance is abhorrent, inexcusable, and antithetical to the character and values of our community.”