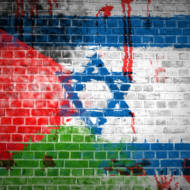 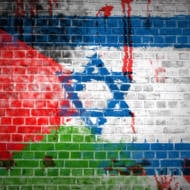 A new survey sheds light on Palestinian attitudes towards Israel, the peace process and their own leaders.

“When asked how to break the current impasse, 68% of Palestinians choose violence, ranging from an all-out terror war (44%) to sporadic terror attacks (24%). Only 25% choose the path of negotiations,” reported Palestinian Media Watch in its analysis of the survey.

Key takeaways from the Palestinian Center for Policy and Survey Research include what it described as “the success of the so-called confidence-building steps’ between the Palestinian Authority (PA) and Israel,” as well as a failure by Hamas to “translate the gains it made in the May war with Israel to positive change on the ground in the Gaza Strip or East Jerusalem.”

• 63% said they had favorable views of Israeli confidence-building measures such as steps to improve life and reunite families while 30% had negative views.

• Asked about an unconditional return to peace negotiations, 70% opposed while 22% favored it. A 57% majority also opposed returning to talks under the Quartet’s multilateral context while the idea was favored by 38%. The Quartet comprises the United Nations, U.S., European Union and Russia.

• 64% are opposed, and 30% are supportive, of a return to dialogue with the new US administration under president Joe Biden.

• 72% say they support the holding of presidential and legislative elections while 26% opposed.

• If Mahmoud Abbas ran against Ismail Haniyeh in elections today, only 51% would participate. Among those participating, Haniyeh would take 54% of the vote while Abbas would receive 38%.

• If Marwan Barghouti ran against Haniyeh in elections today, participation would rise to 64%. Barghouti would take 59% of the vote to Haniyeh’s 37%. Barghouti is serving five life sentences for commanding the Al-Aqsa Martyrs Brigades during the Second Intifada.

The survey had a margin of error of 3%.