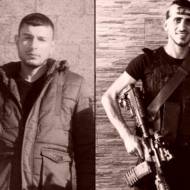 Abbas declared that a terrorist who murdered three Israelis in cold blood was “defending the land of Palestine and acting in the people’s honor.”

Hazem was killed in a shootout with Israeli security forces after an overnight manhunt.

Two days later, Ahmad al-Saadi of Palestinian Islamic Jihad was killed in a Jenin shootout with Israeli security forces during a counter-terror raid.

Both were from the Jenin area.

Abbas’s message was delivered to their families by Jenin District Governor Akram Rajoub as he made condolence visits, according to PMW, which cited Palestinian media reports. Rajoub led a delegation of leading figures in the Palestinian security services during the visits.

The PA president declared that both were “defending the land of Palestine and the people’s honor,” acting “for the sake of Jerusalem and the Al-Aqsa Mosque.”

Rajoub told the families, “The Martyrs’ blood will continue to illuminate the path to liberation through our national unity, so that we will fight the settlers’ extremist government and its terrorist policy, which is targeting everything Palestinian.”

Nazareth deputy mayor Samir Saadi stoked controversy after the raid with a Facebook mourning Saadi’s death and calling him a “martyr.” Israel’s Kan News reported that the two were relatives. Facing a backlash, Saadi deleted the post and locked his Facebook account.

According to a Dutch study cited by the Jerusalem Post, “Ramadan brought with it a 200% increase in terrorist attacks in Israel between 2005 and 2016.”