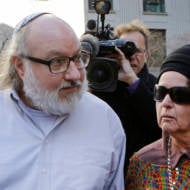 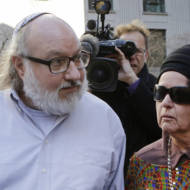 “After decades of fighting for my release, I felt so helpless that I could not help her in her struggle for life.”

Pollard had contended with breast cancer in recent years. She was infected with the Coronavirus, and her situation deteriorated in recent days. She was 68 years old.

The Pollards arrived in Israel in December 2020 to live in Jerusalem, 35 years after Jonathan was arrested for spying for Israel.

Pollard said in a statement that “I did not imagine in my worst nightmares that I would lose Esther. After decades of fighting for my release, I felt so helpless that I could not help her in her struggle for life.”

Nitsana Darshan-Leitner, Jonathan Pollard’s attorney, eulogized Esther and said that “she acted fearlessly out of a genuine belief in the righteousness of her way. Every day she was by his side, in every prison house and in every crisis and did not look right or left until they finally landed in the Land of Israel to begin their free path.”

“It hurts so much to hear this morning that she enjoyed the joint freedom for only one year in total. I send sincere condolences to Jonathan and the whole family,” she added.

Prime Minister Naftali Bennett stated that he was “sorry to hear of the passing of Esther Pollard, a woman whose devotion and love for Jonathan Pollard had become a symbol of strength, determination and faith.”

Member of Knesset (MK) Bezalel Smotrich stated that he “shares in the heavy mourning of Jonathan Pollard over the death of his faithful and heroic wife Esther.”

“I pray that God will give him the strength to overcome the great loss and continue in a good and healthy life for days and years,” he added.

MK Itamar Ben Gvir stated that “the heart is broken in two, upon hearing this morning about the death of the late Esther Pollard, who gave her life for the State of Israel together with her husband Jonathan Pollard. I send my condolences to her husband and family. The people of Israel will not forget your devotion. In the building of Zion and Jerusalem, you will be comforted.”

MK Michal Waldiger said that “the heart aches, Esther Pollard passed away after she fell ill with Corona and was battling cancer. Esther Pollard is a lesson in the strongest faith! She is an extraordinary inspiration to a woman who fought, believed and did not give up for 35 years, she is an example of courage, loyalty and Zionism.”

Yehudit Katsover and Nadia Matar of the Sovereignty Movement, said that Esther “was an exemplary personality, who persisted to the end in achieving her goals. Nothing could divert her even one millimeter from the path of freeing Jonathan from prison for the ‘sin’ of loving the Land of Israel.”

“Despite the physical distance between them, Esther and Jonathan were one body and soul, joined by their great love for, and devotion to, the Land of Israel, without fear and without apprehension,” they said.

“Esther knocked on the doors of world leaders, never resting for a moment. When she was not traveling, she was organizing moving prayer vigils throughout the Land. With her devotion, Esther succeeded in gaining a free and happy Jonathan here in the land of his forefathers, on whose behalf he sacrificed for more than thirty years.”

“They were together in this mission that united them, a mission that will remain in the nation’s memory forever. May her memory be inscribed forever in the annals of the Jewish people,” they concluded.

She was born in Toronto as Elaine Zeitz and first met Jonathan in Israel when they were teenagers. After Jonathan was arrested in 1985, she began writing him letters of encouragement.

Jonathan’s first wife, Anne Pollard, who served three and a half years in prison for her role in the affair, filed for a divorce after she made parole.

After serving 30 years in a U.S. prison for his espionage activity for Israel, Jonathan Pollard, a former U.S. Navy analyst, was released in 2015 but banned from leaving the U.S. and was placed under several limitations. Under the terms of his parole, Pollard was forced to remain in the U.S. until 2020 when the restrictions were not extended.

Mrs. Pollard, an Israeli citizen, was contending with advanced cancer. Their arrival in Israel was delayed while she underwent chemotherapy.

Mrs. Pollard will be buried in Jerusalem’s Har HaMenuchot Cemetery on Monday.