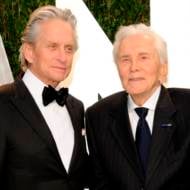 Kirk Douglas has received an early 100th birthday present — an award from the World Jewish Congress for his strong support for Israel, including starring in the first Hollywood feature film shot in the newly established nation.

Ronald Lauder, the organization’s president, said Douglas, who was born Dec. 9, 1916, was “always proud of his Jewish roots.”

He pointed to Douglas’ starring roles as a Holocaust survivor in the 1953 movie “Juggler,” and as Jewish US Army Col. David “Mickey” Marcus, who helped save the Jewish state in 1948 in the 1966 movie “Cast A Giant Shadow.”

His son, Oscar-winning actor and producer Michael Douglas, accepted the award at a dinner at the Pierre Hotel on Wednesday, telling over 400 guests that his father will be “so proud and so humbled.

Born as Issur Danielovitch, Kirk Douglas has come closer to his Jewish roots and heritage in recent years.