Jerusalem Mayor Nir Barkat was visibly moved when presented with a historic book, compiled by United with Israel, of over half a million signatures of members from around the world declaring support for a united Jerusalem as the eternal capital of the Jewish state.

The timing was perfect. A few days before Yom Yerushalayim – Jerusalem Day, when Israelis and Jews around the world will celebrate the 50th anniversary of the reunification of the Israeli capital, United with Israel (UWI) visited Jerusalem Mayor Nir Barkat, presenting him with a book of over half a million signatures of people from 168 countries demanding that Jerusalem remain united as the eternal capital of the Jewish state. 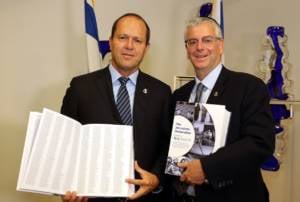 During the 1967 Six Day War, when Israel was defending itself from the surrounding Arab nations determined to annihilate the Jewish state, the IDF achieved a miraculous victory, culminating in the reunification of Jerusalem, the ancient Jewish capital.

In a unique project, UWI accumulated over 500,000 signatures to the statement, “I declare that Jerusalem is the eternal capital of the Jewish People and support all efforts to maintain and strengthen a united Jerusalem as the undivided capital of the State of Israel.”

UWI Founder Michael Gerbitz was encouraged by the mayor’s warm response, expressing appreciation to Mr. Barkat for the great work that he has done on behalf on the residents of Jerusalem and the Jewish people at large. “I pinch myself every day to make sure it’s real,” answered Barkat, as he expressed his feelings of deep honor and gratitude to serve as Jerusalem’s top official. During the meeting, Barkat presented United with Israel with a personal note of appreciation for “helping Jerusalem lovers and supporters come together and show their commitment to the eternal, united and undivided capital of Israel, the heart and soul of the Jewish people.”

UWI has close to five million members. Since publishing the book a couple of weeks ago, the number of supporters has increased by tens of thousands and continues to grow rapidly.

Historic Show of Support for Jerusalem

The Jerusalem Declaration is historic in terms of being the largest display of grassroots support for a united Jerusalem. The ongoing online initiative, which has thus far recorded over 535,000 signatures, can be viewed at www.jerusalemdeclaration.com. Barkat, as mayor of Jerusalem, was the first to receive the book. Special editions have been printed and will be presented to Prime Minister Benjamin Netanyahu and US President Donald Trump.

The historic declaration supports free and open access to Jerusalem for all peoples and religions under the sovereignty of the State of Israel, and rejects returning Jerusalem’s status to a divided city, as was the case between 1948 and 1967.

During that time, Jordan controlled the eastern section of Jerusalem and forbade non-Muslims from entering the holy sites, including the Western Wall and the Temple Mount.

The document describes the unbreakable connection between the Jewish people and Jerusalem.

In biblical times (11th century BCE), Jerusalem was established as the capital of Israel by King David. Ever since, there has been a formidable Jewish presence in the city whenever historically possible. The Jewish connection to Jerusalem has been overtly proclaimed throughout the centuries as Jews worldwide proclaimed, “Next year in Jerusalem!”

UWI’s Jerusalem Declaration urges world leaders, including the US president, to recognize the unbreakable bond between the Jewish People and Jerusalem and to guarantee that Jerusalem remains the undivided capital of the State of Israel.

The document encourages Netanyahu and Barkat, as representatives of the People of Israel, “to continue to do everything in their power to maintain and strengthen a united Jerusalem for the benefit of the State of Israel, the Jewish people and the entire world.”

Barkat to Trump: ‘Jerusalem is United and Indivisible’

A day after UWI’s visit to the mayor, as Jerusalem prepares to celebrate the 50th anniversary of the reunification of the city, Barkat launched a new campaign with a video addressing the American president, titled, “Jerusalem will remain united under Israeli sovereignty forever.”

Jerusalem Mayor Nir Barkat with members of the United with Israel staff. (UWI)

In the video, timed specifically ahead of Trump’s visit to Jerusalem and talks of renewed negotiations with the Palestinian Authority, Barkat congratulates Trump on his arrival and sends a clear message to the American administration: Jerusalem is united and indivisible.

Click on the image below to view Barkat’s video, which will be distributed as part of a large-scale campaign in social and traditional media outlets ahead of Trump’s visit and the 50th anniversary celebrations of the reunification of Jerusalem.