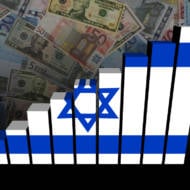 The year 2016 was one of the best for the Israeli economy, with an amazing growth rate and world-leading stability.

A nearly nonexistent inflation rate and low unemployment have helped propel Israel to the No. 3 spot on a list of the world’s most stable and promising economies for 2016 published by the Bloomberg financial news agency.

The list named Hong Kong as the most stable economy in 2016, followed by South Korea. Denmark, Taiwan, Iceland, Japan, Switzerland, Singapore and Thailand followed Israel to round out the top 10 in the rankings.

The countries ranked lowest for stability in 2016 included Croatia, Colombia, Uruguay, Brazil, Serbia, Spain, Ukraine, Turkey — ranked fifth from last — Greece, Argentina, and South Africa. The country whose economy was rated last for 2016 was Venezuela, despite its rich oil resources.

Israel’s economy continues to perform well by international standards. In January, Israel cracked the top 10 on the 2017 Bloomberg Innovation Index, which rates the level of innovation in a nation’s economy by scoring its spending on research and development and the number of publicly traded high-tech companies.

Earlier this month, a report by Bank of America Merrill Lynch deemed the Israeli economy “on a robust recovery path with growth rates running at 3 to 4 percent levels,” noting that the Bank of Israel was “defying gravity” by checking the appreciation of the shekel against the dollar.

Israel’s economy grew 4 percent in 2016, exceeding the growth rate of other Organization for Economic Co-operation and Development (OECD) member states, which averaged 1.7 percent, the Israeli Central Bureau of Statistics said in March.

The newly released data also said Israel’s gross domestic product per capita has also grown. Private consumption of fixed-price goods and services increased 6.3 percent in 2016, after growing 4.3 percent in both 2015 and 2014. Overall, 2016 saw a 2 percent rise in fixed prices, which are unaffected by inflation rates, compared to 0.5 percent growth the previous year.

“It is safe to say that 2016 will be remembered as one of the Israeli economy’s best years,” Finance Minister Moshe Kahlon stated after the CBS released its report.