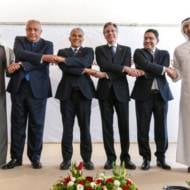 Forestalling nightmare scenarios is Israel’s priority, but the Arab alliance can’t entirely replace the part played by the retreating U.S.

Convening a summit with Arab states on Israeli soil is something to savor for anyone who cares about the Jewish state.

After being isolated from its neighbors for most of its 74 years of existence, and being subjected to cruel boycotts and campaigns—both military and diplomatic—aimed at eliminating it, Israel has in many respects assumed its proper place as a nation to be reckoned with in the Middle East and the world.

That’s especially true in a time of crisis with the impact of a European war being felt in the region, as well as the impending agreement between the United States and Iran on a new and likely even more disastrous nuclear deal.

Although this is a moment for Israelis to celebrate—marred though it has been by two deadly terrorist attacks inside the country in the last week—they would do well to concentrate more on the problems that the Jewish state and its Arab partners are facing than on endlessly hyping the historic nature of the summit.

Indeed, the reason behind the meeting is not a celebration in and of itself. It’s to contend with the urgent need for coordinated responses to the continued American retreat from the region, as well as by the Biden administration’s determination to push ahead with a new nuclear deal with Iran that will make all of the attending countries a lot less safe.

The meeting at Kibbutz Sde Boker is being attended by the foreign ministers of three of the Arab countries that signed the Abraham Accords normalizing relations in 2020. With a representative of Egypt, which signed a peace treaty with Israel in 1979 but whose relations with it were ice-cold until the last few years when its government began to view Israel as an ally against the Muslim Brotherhood and other Islamists, joining the event along with U.S. Secretary of State Antony Blinken, it’s fair to say that the vision of expanding the circle of peace is truly being realized.

That’s a good confirmation for those involved in forging the normalization agreements, which was the work of the Trump and Netanyahu administrations. It further exemplifies that the Accords are not, as some critics claimed at the time, a largely symbolic gesture; from the start, they have led to tangible progress that has brought these nations, along with others in the region, closer together.

And that’s bad news for Palestinian Arabs, who are lamenting that they’ve been sidelined by the Accords. Israel-haters, including those American “progressives” who buy into intersectional myths about the Jewish state being a function of “white privilege” and continue to seek its elimination, are out of touch with the diplomatic reality that the summit represents.

But the Arab and Islamic world—excluding Iran and its Islamist allies—is no longer willing to be held hostage by Palestinian fantasies of rolling back the clock to 1947 or 1917.

More to the point, they understand that Israel is not only a potential economic partner but a vital strategic ally in the struggle against a country that is a genuine threat to them all: Iran. The Islamist regime is steeped in Shia extremism, which frightens predominantly Sunni nations, and it wants to establish regional hegemony with the help of its various terrorist auxiliaries and allies.

The process by which the Gulf states and others gave up their ideological and religious-based intolerance for Zionism didn’t begin in 2020.

Rumblings in the Arab world about the need for an alternative to being dragged into endless conflicts by the Palestinian refusal to make peace on any terms but Israel’s destruction were given a major boost by former President Barack Obama’s initial efforts to appease Iran. The Sunni Arab states understood that Obama was interested in abandoning them, as well as Israel, for a new connection with Tehran, and that pushed them into the arms of the Jewish state.

And when the Trump administration got behind this trend, which former Secretary of State John Kerry declared to be as impossible as it was unwelcome because of his obsession with empowering the Palestinians, it became a reality.

Still, the circumstances that made this summit a necessity are ominous.

While Blinken has been trying to calm both Israel and the Arab states by claiming that the new Iran deal doesn’t mean that the Biden administration isn’t committed to stopping Iran’s nuclear ambitions or its terrorism, his assurances are as worthless as they are disingenuous.

The pact whose final touches are still being worked on in Vienna will be even more of a game-changer than the original 2015 Joint Comprehensive Plan of Action (JCPOA).

With only a few years to go before the sunset clauses that will grant Iran a legal path to a bomb expire, the decision to once again kick the nuclear can down the road is even more irresponsible today than seven years ago. The massive infusion of cash that the lifting of sanctions and the sweeteners Biden’s Iran envoy Robert Malley has tossed Tehran to entice them to rejoin the JCPOA will be a gift to the terrorists that depend on Iranian largesse.

Yet even more serious are the messages the United States is sending by agreeing to a deal that will inevitably lead to the West’s acceptance of Iran as a nuclear threshold state and refusing to act to stop that from happening.

That creates a new geostrategic reality for both Israel and the Arabs that no amount of sweet talk from Blinken can erase: they are on their own vis-à-vis Iran. The combined strength of the summiteers and those who are not there but still aligned with them, like Saudi Arabia, is formidable.

But that position is not nearly as strong as it would be if they—and the Iranians—knew that the United States had their back. And there is no mistaking that the American commitment to appeasing Iran, which seems to be an even higher priority than its current desire to aid Ukraine against Russia, is something that must inevitably overshadow the hoopla about what is happening in Sde Boker.

The point of the event is to demonstrate to the Iranians as well as the Americans that both Israel and the Arabs aren’t taking these developments lying down. Their closeness, which the summit is illustrating, is a riposte to the new JCPOA that ought to give both Washington and Tehran pause.

Nonetheless, it would be foolish to pretend that the circumstances that brought these countries together is not a catastrophic American policy for which no regional alliance can entirely compensate.

A world in which the United States is content to continue retreating—as demonstrated by Biden’s disgraceful exit from Afghanistan—is one in which a great many terrible things suddenly become realistic possibilities. That’s part of the correlation of forces that led to the invasion of Ukraine.

Forestalling similar nightmare scenarios is the top priority of Israel and its new partners. But the notion that any such alliance can entirely replace the part played by an America that is no longer committed to defending its friends and deterring its foes is wishful thinking.

Jonathan S. Tobin is editor-in-chief of the Jewish News Syndicate.