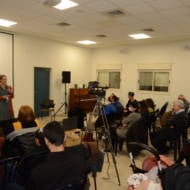 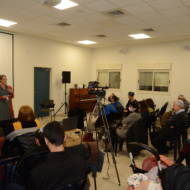 The Mifgash Therapy Center and the Center for Israeli Resilience hosted a special trauma symposium this past week for the parents and therapists of Israeli children who grew up in communities affected by Arab terror.

The speaker of honor was David Rubin, who heads the Shiloh Israel Children’s Fund and is the former mayor of the town Shiloh. The evening was in commemoration of the terror attack in which Rubin and his then three year old son were wounded twenty years ago. That tragic event propelled him shortly thereafter to launch Shiloh Israel Children’s Fund, which sustains the center.

Rubin reflected on the event saying: “It was good, very very informative. We spoke about the issue of trauma which is a serious issue in Judea and Samaria – specifically Samaria in this case.”

“There was a mix of parents, therapists and community leaders, and professionals who were interested in learning more,” Rubin added.

“When the terror waves started in 2000-2010, all the focus was on physical recovery,” he explained.

“It was only later that people started to recognize the psychological effects on children. You don’t notice it right away, only later.”

Rubin, who also authored the highly acclaimed book ‘Confronting Radicals: What America Can Learn From Israel’, noted that the effects are often seen months and even years after the fact. Symptoms can include “sleepless nights, anxiety attacks, panic attacks – these are things that children suffer from, and everyone suffers through the symptoms of their suffering,” he noted.

The event featured a musical performance by Avichai Hollander, an artist who sang about the psychological trauma of IDF soldiers and victims of terrorism.

“The symposium was a chance to talk about it and the things we are doing to combat it and how our therapy center is involved in that,” Rubin told Israel365 News in an exclusive interview.

As noted above, the event marked the twenty-year anniversary of the night when Rubin and his son were victims of a bloody terrorist shooting attack. Since then, he has made it his mission to help rehabilitate Israeli children affected by Islamic terrorism throughout Israel.

In addition to the many who packed the intimate Mifgash hall, many participants throughout the world tuned in via Zoom.

Click here to learn more about the Shiloh Israel Children’s Fund. See how you can help heal child victims of terror.