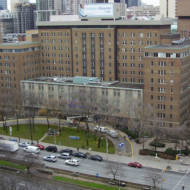 A team of experts from Israel’s Rambam hospital shared their knowledge on how to prepare for disasters, such as mass casualties, at Toronto’s Hospital for Sick Children.

Israel has a lot to teach Canada when it comes to emergency preparedness, according to Sick Kids hospital in Toronto, which hosted a team from Rambam Hospital in Haifa on Nov. 8 and 9, to share knowledge about how to prepare for disasters.

“Obviously, we are not a country under terrorist attack,” said Dr. Gail Annich, director of the Critical Care Response Team (CCRT) at the Hospital for Sick Children. “But as our city has gotten larger … we need to have something in place that allows us to take many casualties at one time.”

As Annich told the CJN, numerous types of disasters could lead to multiple patients arriving at Sick Kids’ door simultaneously. “There isn’t terrorism or missile attacks, but there certainly could be guns and violence; there are traffic accidents, catastrophic events that could occur. As Toronto has gotten bigger, there are huge events where children and families participate downtown.”

And in a country like Canada, with vast distances between facilities that provide pediatric intensive care, Annich said that Sick Kids must be able to stand on its own. “If we need emergency help, we have to be able to handle it at Sick Kids, in the downtown core, fairly rapidly and readily,” she said.

The Israeli group, which is led by Dr. Miki Halberthal, came to Sick Kids with the goal of assessing its current level of preparedness and assisting Annich’s team in putting policies into place, so that they will be ready, in the event that the unthinkable happens.

“They know the medicine, the medicine is not the major issue; the issue is system preparedness,” said Halberthal. “How do you arrange the emergency room, the operating room, triage?”

‘A Solution to Every Episode’

Expertise gained from real-world experiences in Israel is very transferable to Toronto, Halberthal pointed out.

“You have to develop a generic response that will give a solution to every episode, whether we’re talking about motor vehicle accidents, natural disasters, you don’t need much: two school buses colliding on the QEW creates a mass casualty scenario,” said Halberthal.

“Obviously, if something like this happens, you have limited time to prepare. So you have to do it in advance. You have to develop protocols, get people to train. If you don’t train, you’re not ready.”

Annich believes that one urgent problem faced in Canada, is the lack of regular emergency preparedness drills, not only at Sick Kids, but throughout the health-care system. “In Israel, there are country-wide drills,” she said, but this doesn’t exist in Canada. “We don’t even have standard drills for (the) Greater Toronto Area.”

About 40 members of Sick Kids’ mass casualty team participated in the training program.

In April 2017, Toronto hosted the WADEM Congress on Disaster and Emergency Medicine, hosting delegates from over 50 countries and representatives from the World Health Organization, International Red Cross and Red Crescent, Médecins Sans Frontières and other organizations. Kobi Peleg, head of the Israeli National Center for Trauma and Emergency Medicine Research, spoke at that conference, which inspired Sick Kids to invite Israeli experts to train its staff.

‘We Cannot Be Naive’

Although terrorism isn’t exactly on the radar at Sick Kids, Annich said that, “We cannot be naive to the fact that as our cities become more desirable to people from all over the world, they could also be potentially at risk for terrorism of all sorts, even if it’s local, home grown. We have to be prepared for that, we have to have governmental support for that. It should be given as high priority as cancer, HIV research or anything else.”

This is the second recent collaboration between the two hospitals. Earlier this year, they launched a joint program dealing with hematology and oncology. The collaboration is longstanding, says Halberthal, who trained at Sick Kids in pediatric intensive care in the 1990s. They also held a gala dinner in 2007 to raise funds for Rambam, the University Health Network and Sick Kids.

“Sick Kids is one of the best pediatric hospitals in the world,” said Halberthal. “So we have lots of physicians who are going to Sick Kids for fellowship training.”

Rambam also has a major collaborative partnership with Baycrest Health Sciences, to foster innovation in the geriatric field.

“The emblem of Rambam is the tree of life,” said Halberthal. “Our philosophy is that the branches of that tree are the bridges you can make with medicine – bridges towards peace, extending innovation, research. At the end of the day, the mission that all of us have is doing our best for our patients.”