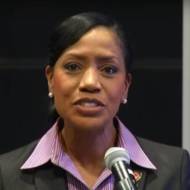 Did the Durham police chief’s statement that she has “no intention to participate or initiate an exchange with Israel” violate North Carolina’s State Constitution?

Two Israeli volunteer police officers, Moshe Eyal and Itay Livneh, filed a lawsuit against the city of Durham, North Carolina, and its police chief, Cerelyn “C.J.” Davis, over a memo in which she stated that she has “no intention to participate or initiate an exchange with Israel,” as part of the Durham Police policing exchange program.

According to the lawsuit, which was prepared by the International Legal Forum together with American attorneys David Abrams and Daniel Meier, the memo sent out by Chief Davis constitutes a discrimination against a group of people based on their ethnicity and place of birth.

“The city of Durham has two standards when it comes to international police exchanges: One for the Israelis and one for the rest of the world,” the lawsuit stated, claiming that the policy stands in violation of a section of the North Carolina Constitution that states that no one shall be discriminated against because of race, color, religion or national origin.

The saga began when the NGO Demilitarize Durham 2 Palestine, led by the Triangle chapter of Jewish Voices for Peace, began circulating a petition demanding that Durham not send police officers to train in Israel.

In response, Davis sent out a memo to “clarify” that recent participation of Durham Police officers in a training program in Israel pertained to “leadership building” and did not deal with policing, adding that she has no intention of working with the Israeli Police in the future.

Nothing to Do with Anti-Semitism?

While the plaintiffs are suing the City of Durham for discrimination, and demanding that the word “Israel” be removed from the memo, Durham’s Jewish Mayor, Steve Schewel dismissed the claims, saying it has nothing to do with anti-Semitism.

“I’m Jewish. I can understand anybody who’s worried about anti-Semitism in this country or elsewhere,” Schewel told the Herald Sun, “but this has nothing to do with that. This is all about policing,” he added.

Schewel asserted that the city will not remove the word “Israel” from the memo, saying, “We’re not going to be revisiting this. This issue is something we’ve dealt with. It’s settled. But I know there’s still concern in the community … and I’m always happy to talk to people.”